Baryonyx is the main Dinosaur in Jurassic Park 3

Yeah it was supposed to be but got cut.

Yeah, Baryonyx appears in the brochure. However, we don't what phase of the park that brochure repressents. Baryonyx (and Segisaurus) are not featured in the Tour the Island map, nor in the InGen Field Guide and InGen Field Journal. This probably means that it wasn't sceduled for Phase I. If that is true, it is unknown whether Baryonyx already had a paddock in Isla Nublar. We don't even know if its cloning process was finished yet. MismeretMonk (talk) 20:02, February 5, 2013 (UTC)

Why does this page have this category? It didn't appear in Jurassic Park: Operation Genesis.

Is JW:FK Baryonyx the same thing as the originally cloned JP Brochure Baryonyx?

I mean, it is very different from the JW Baryonyx (although Colin confirmed that the JW Baryonyx was just a picture of the real animal itself), so is the turquoise-ish grey colored Baryonyx the original Baryonyx from Jurassic Park?

Now I know that this is Jurassic Park lore and dinosaurs aren't accurate to their real-life counterparts, but this is almost as bad as the missing toe claw on the raptor toy in the JW toyline. It lacks its' thumb claw, which probably its' most defining trait, the thumb claw, which its' name is even named after: "Heavy Claw". Animalman57 (talk) 09:45, December 24, 2017 (UTC) 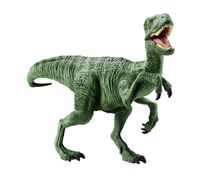 This level of bad 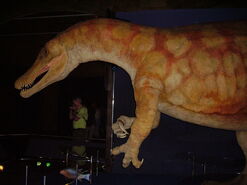 Thumb claw
Add a photo to this gallery

It also is missing it's long, slender, crocodilian snout, making it look more alligatorian snout, along with this the freaking body is more like a general theropod's, whoever created and approved of this design really wanted it to look like an average theropod. Theferretman21 (talk) 19:05, February 8, 2018 (UTC)Theferretman21

Actually I can see it too. It might be a bit smaller than it would be in real life, but it's there. It's way more noticeable on the toy though. However, I still think we should wait to see the Baryonyx in a more open setting with better lighting before we declare what it has and doesn't have from its real life counterpart. {{SUBST:User:Logo8th/Sig}} 16:08, February 19, 2018 (UTC)

Nevermind, the thumb claw is actually there. I think we should use the DPG photo of the Baryonyx as the main picture of the page for a more updated look. Dinosaurus1 (talk) 22:20, March 13, 2018 (UTC)

I think the design was changed, look at the jaw, a smaller version of the notch in the is in the new image. The people who've made the model may of actually listenrd to us for once and have given us a more accurate animal!! Theferretman21 (talk) 23:00, March 13, 2018 (UTC)theferretman21

Retrieved from "https://jurassicpark.fandom.com/wiki/Talk:Baryonyx?oldid=175836"
Community content is available under CC-BY-SA unless otherwise noted.