Tanycolagreus is a coelurosaurian theropod from the Late Jurassic period of North America.

Carpenter et al. (2005, pp. 43–44) determined that the holotype of Tanycolagreus represents a subadult individual which measured approximately 3.3 meters (11 feet) long in life. However, one of the referred fossils, the premaxilla from the Cleveland-Lloyd Quarry, would have belonged to a larger individual, measuring 4 meters (13 feet) long. In 2010 Gregory S. Paul estimated the weight of a four metres long animal at hundred twenty kilogrammes. It cannot be determined whether or not the Cleveland-Lloyd specimen represents a fully mature adult, so the upper size limit for the taxon remains unknown.

The head of Tanycolagreus is large, elongated and rectangular in profile due to a blunt snout. The leg is rather long and lightly built.

The single premaxillary tooth preserved with the holotype is badly damaged, but does exhibit the asymmetrical cross-section typical in theropod teeth; the cheek teeth are too poorly preserved to show any detail. In the foot the second toe is slightly hyperextendable but does not carry an enlarged claw.

Tanycolagreus became an available VIP creature in the game on June 29, 2016. An interesting feature to the Tanycolagreus in the game is that it has fur-like feather, which it had in reality. 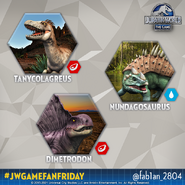 Tanycolagreus appeared in Jurassic World: Alive as a wild card common creature. An interesting feature to the Tanycolagreus in the game is that it has fur-like feather, which it had in reality.