Jurassic Park Wiki
Register
Don't have an account?
Sign In
Advertisement
in: Animals, Marine reptiles, Marine Animals Discovered in the 1850s,
and 8 more

Jurassic Park Series 2
Jurassic Park: Dinosaurs
Tanystropheus was a genus of the Prolacertiformes order, not the Dinosaur order. Tanystropheus was a piscivorous (or 'fish-eating'). It lived during the Triassic period in Europe and the Middle East. It had an extremely elongated neck, which measured 3 meters (10 feet) long - longer than its body and tail combined. Its skull had a long, narrow snout sporting sharp interlocking teeth. Skin impressions of Tanystropheus, showing that it was covered in semi-rectangular, non-overlapping pattern of scales. Tanystropheus is typically depicted as a primarily aquatic animal, while most paleontologists now believe that it was mostly terrestrial, sitting on the coast and using its long neck to catch fish from afar, but it doesn't rule out it can swim since it did live near the coast.

Tanystropheus appeared in the franchise in Kenner's toyline Jurassic Park Series 2. It had a flexible neck to grab a human action figure ("constrictor neck attack"), which is something it cannot do in real life. 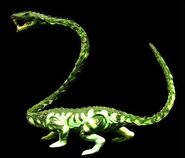