Jurassic Park Wiki
Register
Don't have an account?
Sign In
Advertisement
in: Animals, Pterosaurs, Pterosaurs Discovered in the 20th Century,
and 11 more
English

Tapejara was a genus of likely frugivorous pterosaurs from the Early Cretaceous Santana Formation of northeastern Brazil. They reached a wingspan of 3.5 meters (11 feet).

They can be easily recognized by their massive and presumably brightly coloured or patterned crests consisting of a bone frame with a sail stretched between. This crest varied in size (~1-3 feet across) between species, and is shared only with Tapejara's closest relatives. The genus Tupandactylus were formerly considered species of Tapejara.

Tapejara is one of the creatures available in the IOS and Android App game Jurassic Park: Builder. it was released for the first time on November 14th 2014. It appears to be based on Tapejara navigans, which is now considered a species of Tupandactylus. Despite being a carnivore and a pterosaur in the game, they get an enclosure without fences like what the herbivores in the game get. Ironically, the real animal was likely an herbivore. 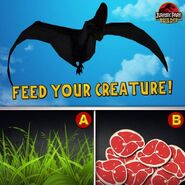 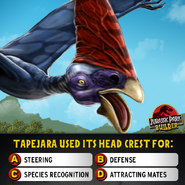 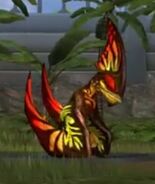 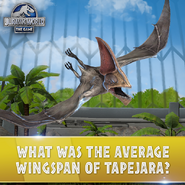 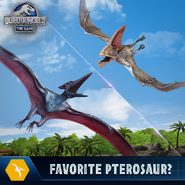 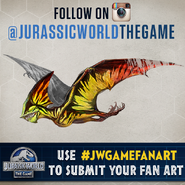 In the Jurassic Park III toy line, a doll of Tapejara appears. It has a very large crest. Compared to the human figures of the same series this Tapejara appears to have a wingspan of at least 10 metres, while the only known Tapejara species only grew to a wing scale of about 6 metres. It appears to be based on Tupandactylus, which only had a 5 meter wingspan.[1] The toy figure is shown it has teeth on its beak which it does not have in real life.

A 2019 line from Mattel features Tapejara. Like the previous toyline, it appears to be based on Tupandactylus. 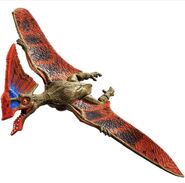 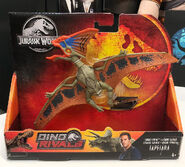 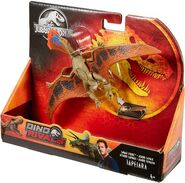 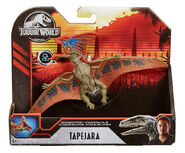