Tarbosaurus was a very close relative to the Tyrannosaurus rex in size and also the massive skull which is 4 feet long. Tarbosaurus was a large dinosaur about 40 feet long and weighed 6 tons. It lived in Southern Mongolia in the late Cretaceous, 67 million years ago. It was one of the last surviving dinosaurs. Research by scientists suggests that Tarbosaurus is very close to T. rex, but there is debate on whether or not to move the species T. baatar to the Tyrannosaurus genus. The main noticable differences between the two is that Tarbosaurus has a thinner jaw, more heavily serrated teeth, a wider gape, and somewhat weaker bite force than its North American cousin. These are due to Late Cretaceous Asia lacking large amounts of ceratopsians and ankylosaurs that Tyrannosaurus rex preyed on, and instead tooth marks show Tarbosaurus was optimized for hunting large sauropods.

It is believed that by some paleontologists that T. rex is a descendent of Tarbosaurus or a sister species to Tarbosaurus bataar that migrated from North America to Asia through some sort of "land bridge" that connect the two continents during the Late Cretaceous period (around 70-66 million years ago).

Tarbosaurus appeared on the website Jurassic Park Institute now archived on Dinopedia (alongside its synonym Maleevosaurus).

While Tarbosaurus does not appear physically in the film, it does appear in a diorama panting where there are two individuals in a background painting. 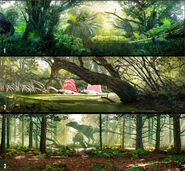 Tarbosaurus is a Carnivore Number Three in Jurassic Park III: Park Builder. Its code number is 019.

Tarbosaurus was at first only mentioned in the evolution facts for its relative Lythronax. Then, it was added on October 9th, 2020 as a VIP exclusive carnivore. 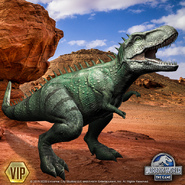 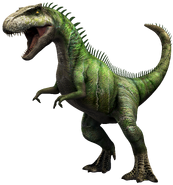 Tarbosaurus is set to be part of the "Massive Biters" assortment for the upcoming Primal Attack line in 2020. This will be the first time it has ever appeared in any Jurassic Park toy set.

The Massive Biter Tarbosaurus from the upcoming Primal Attack wave 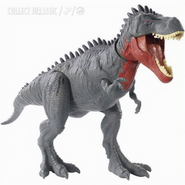