Teratophoneus is a genus of tyrannosaurid theropod dinosaur from the Late Cretaceous period of North America.

In Jurassic World: Fallen Kingdom, Teratophoneus appears as a carcass outside of the old transmitter station on Isla Nublar and as a skeleton displayed in the Lockwood Manor in Jurassic World: Fallen Kingdom. The head on the Nublar carcass is twisted in an unnatural manner, possibly indicating the animal had its neck broken in combat or was dismembered after death. It is unknown if any living specimens were left of this species by the time of Mount Sibo's eruption.

The clones have pronated wrists like all InGen theropods. Its colors are mainly grey with light grey stripes on the neck, and a blue tongue. [1]

Teratophoneus carcass next to Owen Grady

Teratophoneus skeleton Seen at night with the Indoraptor prowling.

Concept design of the Teratophoneus 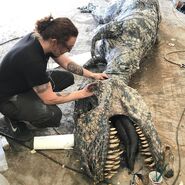