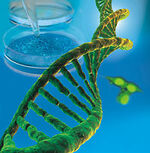 When dinosaur genes are determined from DNA from either bones, amber or gene comparison, it is unknown if those sequences are really functional. The functionality of a gene can be tested by either comparison with known sequences or by inserting it into cells (Transfection).

The processes of CpG methylation and cytosine deaminization must also be considered. A common regulatory device in eukaryotic DNA is the process of CpG methylation, where cytosine immediately preceding a guanine on the same strand is methylated. This acts as a molecular flag to control gene expression. Over time cytosine deamination can occur, in which a cytosine amine group is hydrolysed (replaced with a carbonyl oxygen). An unmethylated cytosine will read as uracil in any technique that relies on Watson-Crick base pairing. If the cytosine has been methylated then the product of deamination will be thymine, which again will be read as thymine. This issue can be addressed in a number of ways. If the DNA sample taken contains more than one copy of the DNA, a mixed signal of thymine and cytosine will suggest the occurrence of cytosine deamination. If the entire sample has suffered cytosine deamination at that point in the sequence, CpG tend to be found in "islands" rich in CpG, so TpG-rich islands or TpG/CpG rich islands would suggest cytosine deamination.

There are many sources of errors in the sequences. One critic wrote about this problem:

It is true that a single error in the sequence (a point mutation) can make a gene non-functional. Sickle-cell disease, a blood disorder, is caused by one point mutation in the β-globin chain of haemoglobin.

The common practice to test a gene is to insert it into a group of cells (Transfection). When the gene is successfully build into the genome of the cells, the gene's functionality can be tested. Dr. Chang and his team successfully used this method to test a Triassic archosaur gene.[2]