Jurassic Park: The Game
Back in the tunnels, Laura offers Gerry some lysine to help keep his muscles at work after all the running he's been doing. He questions Laura that they should have extra lysine for the future due to the parasaurs no longer needing an external supply, but Laura tells him that she put most of it in the main water supply, meaning not only will the herbivores get the lysine, but so will all the other dinosaurs. Gerry asks Laura if she reversed the lysine contingency with the pteranodons, to which she replies that her formula only targets Superorder Dinosauria and would have affected other reptiles if she had tried to account for the Pteranodons.

Laura and Gerry get into an argument about some of the dinosaurs possibly being able to get to territorial lands by swimming, to which Laura believes is ridiculous. She even questions Gerry whether if he has seen any dinosaur trying to swim. Laura begins to explain to Gerry that they denied the dinosaurs the right to breed, but Gerry says they can still do damage. Gerry says he has seen brachiosaurs destroy many trees in their enclosure and is the same as giving the dinosaurs a death sentence.

Laura explained another thing: the possibility that a dinosaur could make it to the mainland is far outweighted by their responsibility to treat the dinosaurs humanely. Laura placed the blame Henry Wu for his idea with the Lysine Contingency, and called it a kill switch. Gerry suggests Laura to re-clone the dinosaurs from Isla Sorna (referred as Site B), however Laura refuses. She plainly tells Gerry that his idea is "naive", and questions him about how much money needed to spend even to clone a dinosaur. Once they finished their argument, Jess returns after she sneaked off. 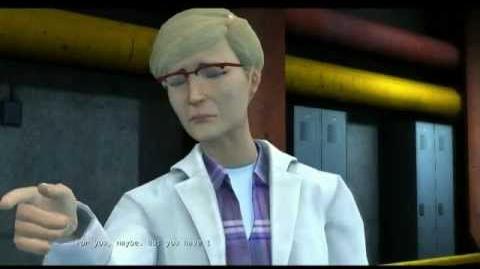 Jurassic Park The Game - Episode3 The Depths - The Argument
Episode 3: The Argument
Community content is available under CC-BY-SA unless otherwise noted.
Advertisement