The player plays as two hunters on Site B. The player has to find Ian and Sarah, who are the only ones who can get him/her off the island. The player must fight their way through the many dangerous dinosaurs that inhabit the island. You are helped by other hunters at some points in the game. Once the player finds Ian and Sarah, he/she must help them get an injured baby Tyrannosaurus rex to their trailer to be looked after, and defeat its very angry parents.

As mentioned earlier in this article, the game was widely regarded as one of the best light gun games ever made and received favorable views in its vast majority. Some players and reviewers however, have criticized the game for its poor story, voice acting, and music composition. 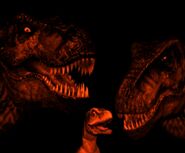