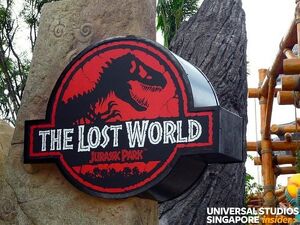 The Lost World is a smaller section of the Park between the sections Far Far Away and Ancient Egypt. The attractions are based on the Jurassic Park Trilogy and the movie Waterworld.

A restaurant in the style of the Visitor Center of the first movie. Here guests can eat laksa, chicken rice and other local delights.

Food Court, with statues of the T. rex and the Spinosaurus

Spinosaurus, the same statue on the left

Dilophosaurus
Add a photo to this gallery

For the other attractions the visitor has to enter the huge Jurassic Park Gates from the first movie.

The Canopy Flyer is a glider-style roller coaster in which you fly through the entire Lost World section with high speed. The ride takes less than a minute.

An attraction in the style similar to Jurassic Park: River Adventure. What's different is, the riders board 9-person circular rafts.

Announcements of possible flash flooding are heard in the background. The raft first passes a Stegosaurus with its young and then passes a lagoon, where a bathing Parasaurolophus pops out of the water, shooting water at the riders. Riders then enter rapids and passes a flooded raft station with a submerged lookout tower and upended raft. The raft is diverted through broken electrified fencing into a restricted area and passes through more rapids sections as several Velociraptors hiss at the vehicle. The raft enters the hydroelectric station as a roar is heard from the bushes. Farther into the station, lights dim as a Tyrannosaurus watches the riders through a small window. As the track becomes totally dark, a beacon in the center of the raft begins to blink. The raft is shunted into one of two small pools, and stops. A Tyrannosaurus pokes its head through the ceiling and snaps at riders as the raft ascends one of two vertical elevators. The vehicle is unloaded from the elevator and descends one of two ramps out of the building at a height of 40 feet. Two Dilophosauruses shoot water at the craft as it returns to the unloading station.

A children's attraction, where they can ride Pteranodons soaring up into the sky or plunging down into the shadows.

A rock climbing/skill challenge attraction, where participants must climb The Lost World's walls to find ambers.

Another restaurant which sells fast food and frozen drinks.

A kiosk which, as its name may suggest, sells popcorn.

Retrieved from "https://jurassicpark.fandom.com/wiki/The_Lost_World_(Singapore)?oldid=226976"
Community content is available under CC-BY-SA unless otherwise noted.