The Thrasher T. rex is a T. rex toy from Kenner's series 1 of The Lost World toy-line. It is based on the female Rex from the Lost World and it's also the second big Tyrannosaur figure in this line, along with the Bull T. rex.

The Thrasher T. rex is known by fans and collectors to be very film accurate in it's sculpt and paintjob, though it's colors are closer to the male Rex from the film. Like the other larger Jurassic Park figure, it's body is mainly made from a rubbery material (though it's a softer rubber than the other dinosaurs in the line) and his limbs and cavity are a harder plastic. Unlike the other T. rex figures it does not have any electronic features, but it makes up for it by having articulated legs which didn't appear in the other ones. 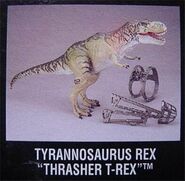 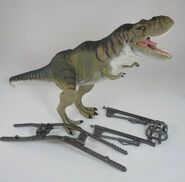 The Thrasher with the capture gear set

Thrasher box from the back

Another front view of Thrasher 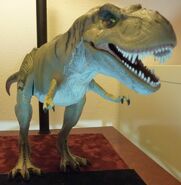 The Thrasher in its capture gear

A shot of its muzzle

The Thrasher with its muzzle off

Left side of the Thrasher

Right side of the Thrasher

Add a photo to this gallery
Retrieved from "https://jurassicpark.fandom.com/wiki/The_Lost_World_Series_1/Thrasher_T._rex?oldid=161770"
Community content is available under CC-BY-SA unless otherwise noted.