The group run from the Raptors, where they enter a room and close the door. Just when they think the raptors are about to bash the door down, they move away from the room for some reason, Laura noting that they're demonstrating their fear reaction. Yoder is angry that Oscar has died, and starts to shout at the top of his voice. He tells the group that he just needs space and five minutes to himself. Jess soon screams as she spots a dead man in what looks like a nest. Nima takes Jess away from the body, in which Gerry and Laura take a closer look. It is revealed that the man is still alive, but only just. Laura tells Gerry that this is the poison's final stage, the same poison that was in Nima, in which the poison shuts down the body and makes the person brain dead. Gerry also learns that eggs has been laid in the body's abdomen. He asks Yoder if he knows the man, to which he realizes it is D-Caf. Laura mentions that she had known the Troodon had got out, and before she can finish her sentence, she is held at knife point by Yoder who questions her about her knowing they were loose. 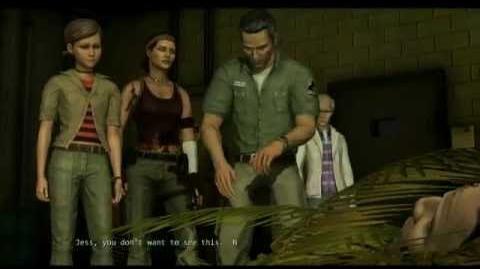 Jurassic Park The Game - Episode3 The Depths - The Nest (Gold)
Episode 3: The Nest
Community content is available under CC-BY-SA unless otherwise noted.
Advertisement