Jess sits in Cart 1, Gerry sits in Cart 2 and Nima sits at the back in Cart 3. They start the ride, but they soon spot Herrerasaurus in the area they need to go. They all duck under a plank that's in their way due to some scaffolding. Gerry manages to grab a pipe, where he manages to knock the lever back, causing the ride to do the full loop. One Herrerasaurus jumps onto the coaster behind Jess. Gerry uses the pipe to knock it off the Bone Shaker. As they reach the top of the ride, a part of the rail collapses, meaning once the ride does another loop, the coaster will fall off the track.

Another Herrerasaurus jumps on, this time in front of Jess. Nima tells Gerry to duck, where she shoots the rope of a metal carrier, causing it to swing down and knock the Herrerasaurus off the ride. Nima ducks under the carrier just before it hits her. Yet another Herrerasaurus jumps on, this time behind Nima. The plank held down by scaffolding comes around again, and everybody ducks, where the plank hits the Herrerasaurus, knocking it off the ride. That is the last of them, but the missing rails come around, and the ride comes to a slow stop, but unfortunately, the first cart tips over, leaving Jess to hang for her life. Gerry grabs a hold of her, causing Cart 1 to fall. Nima runs over to the crane to see if she can help, and just as the coaster is about to fall off the track, Yoder and Oscar arrive and pull Jess to safety. Gerry jumps off of the coaster, where it falls to the rocks below. Nima walks back to them with the gun in her hand. She seems to know Oscar somehow, where he takes the gun away from her. 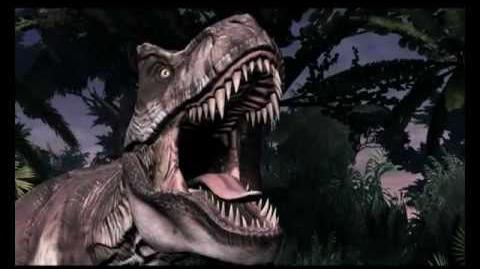 Jurassic Park The Game - Episode2 The Cavalry - The Ride (Gold)
Episode 2: The Ride
Add a photo to this gallery
Retrieved from "https://jurassicpark.fandom.com/wiki/The_Ride?oldid=133410"
Community content is available under CC-BY-SA unless otherwise noted.