Jurassic World (Hybrid use only)[1]

Therizinosaurus is an extinct genus of the therizinosaurid family that lived in Mongolia during the Late Cretaceous period around 70 million years ago.

The appearance of Therizinosaurus had been a debate until recent decades because of the highly incomplete nature of early finds and a lack of knowledge of the dinosaurs that would come to be categorized later as therizinosauridae. During the early phases of its discovery, it was assumed to be a species of an aquatic turtle. After several examinations and revisions, it was given the description of a gigantic carnosaur (at the time, a family that included most large carnivorous dinosaurs) measuring 55 ft in length. After the discovery of related species Nothronychus, the debate over its appearance ended. While its diet remains unconfirmed, Therizinosaurus was originally thought to be a carnivore, at the point when it was incorrectly theorized to be a much larger animal with a radically different body plan. However, today, scientists agree that Therizinosaurus was not carnivorous, instead being herbivorous, based on studies of its close relatives like Erlikosaurus, Segnosaurus, Nothronychus, and Falcarius. Based on studies of its relatives, Therizinosaurus is believed to have had weak jaws and probably would have fed by sitting down and using its long arms and claws to pull vegetation into its mouth. Footprints suggested to have come from unknown therizinosaurids suggest it may have had a plantigrade walking stance, similar to bears and crocodiles.

Dinosaur researchers Florence and Charlie Magovern discovered two 18-inch-long fossilized eggs in the Xixia Basin in Nanyang, China. These are perhaps the largest eggs of any animal ever found. In 1995, a study of one of these eggs conducted by the Mcgoverns and others revealed the bones of a tiny theropod, which possibly belong to a therizinosaur or a herbivore about which little is known. The fossil baby was named "Baby Louie" after photographer Louie Psihoyos.[2]

After ejecting from a crashing plane, Claire Dearing encounter the Therizinosaurus as she was hanging from the seat and parachute she ejected in. The dinosaur at first failed to notice her, and moving instead to fatally swat a nearby deer and begin grazing. Claire used this opportunity to unbuckle and fall to the ground, but the crash alerted the Therizinosaurus to her presence. The Therizinosaurus began stalking around in search of Claire as she crawled into a pond. Claire eventually managed to get far enough in the pond to fully submerge herself until the dinosaur left. 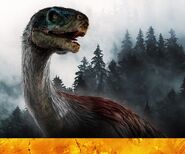 According to Industrial Light and Magic's Sr. Visual Effects Supervisor David Vickery, a long part of the Therizinosaurus' development was spent looking at what types of feathers it would have, which turned out to be hair-like, sparse, vein stuctuted feathers. This worked well with the idea of giving the feathers an oily-looking irridencents.

Concept art of Therizinosaurus in the final battle