Therizinosaurus was added to Jurassic World: The Game on September 30th, 2015 as a Legendary herbivore.

It is unlocked by completing the Earth Shattering event. More individuals can be purchased in the market for 3,500 DNA or found through card packs.

As of April 23, 2018 a level 40 Therizinosaurus can be fused with a level 40 Ceratosaurus to create the hybrid Cerazinosaurus.

"The Therizinosaurus gets its name from Greek, meaning the 'scythe lizard'."

"Did you know the Therizinosaurus has imposing arms? At 8 feet long, they are tipped with 3 foot claws the length of human arms!"

"Standing at nearly 22 feet tall, the Therizinosaurus is taller than an adult giraffe!"

"Weighing in at 3 tons, the Therizinosaurus weighs more than a white rhino!" 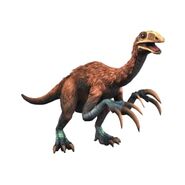 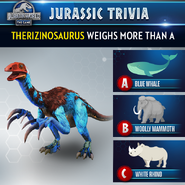 Add a photo to this gallery
Retrieved from "https://jurassicpark.fandom.com/wiki/Therizinosaurus/JW:_TG?oldid=236244"
Community content is available under CC-BY-SA unless otherwise noted.