Jurassic Park: The Game
In the distance, Yoder, Oscar and Nima are still alive when they all jumped out. Nima is unconscious whilst the other two are still alive. Yoder checks the helicopter to see if anything survived the crash, but unfortunately, nothing did. Yoder decides to check Nima's bag, to which he finds a can of shaving cream. Yoder tells Oscar that he once used a can that had a secret compartment, to which he finds the embryos. Oscar scouts on ahead to see if he can find the others, while Yoder stays with Nima.

Oscar reaches the water tower, where he spots the Velociraptors trying to open the door. They succeed, and to get closer, Oscar tries to sneak across the area. He just succeeds, and the Raptors enter the tunnels, to which Oscar follows them with his knife.

Back at base camp, Nima wakes up to find Yoder now in a tree. He confronts her about the embryos, to which Nima convinces Yoder that she will share the profits with him and Oscar. 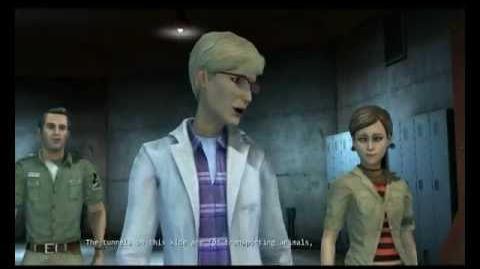