Tiffany,[1] more known as Tiff, is the wife of Mitch, and the main antagonist in the second season of Jurassic World: Camp Cretaceous. The pair are recreational hunters, traveling to exotic corners of the globe to hunt endangered species. The two masqueraded as ecotourists and snuck onto Isla Nublar, where they encountered a group of campers from Camp Cretaceous. Tiff was ultimately killed by Chaos and Limbo after proving herself an enemy towards the campers and abandoning her husband.

Tiff is a Caucasian woman presumably in her mid 30s. She is of short stature with short, blond hair and blue eyes.

At first, Tiff appears to be a friendly, yet a clueless ecotourist, providing food and shelter towards the campers. Soon her true colors are exposed, revealing herself as a violent, irrational, psychotic and deranged recreational hunter, being far less reasonable than her husband. At times (due to several hints in dialogue) she is shown to have a strained relationship with her husband Mitch. She clearly dislikes kids as shown when she tells Mitch how they're glad to not have children, a trait which later escalated to full hatred.

Tiff eventually proves herself to be an opportunistic, cowardly, and uncaring sociopath, regarding the wellbeing of herself over others by abandoning her husband, leading to his fate. She did feel some regret to the destruction of her marriage (vacation and best gun), but ultimately accepted her cowardice which kept her alive and the hatred she displayed toward the campers. Tiff's luck, however, didn’t last long as she, shortly after, was attacked and killed by the Baryonyx-siblings Chaos and Limbo in revenge on her for killing their sister Grim.[1]

Arriving to the island, the couple employed Hap as a guide. Initially the two appeared as clueless, friendly ecotourists upon finding the campers.[2] When her true nature is exposed and Darius learns of the two being hunters, Mitch threatens him into helping the two, with either killing the group or the dinosaurs on the island; demanding Darius to take them to the watering hole. When the park systems shut down, Darius instead brings the two to Main Street. Tiff was far less rational and patient than Mitch, eagerly willing to rid herself of the children and impatient with their slow progress.[3]

However soon after park systems are recovered by the campers led by Brooklynn, their tablet receives power and the two give up pursuing Darius now having no use for a guide.[4] Making their way to The Watering Hole Tiff and her husband Mitch find themselves inside the Carnotaurus Paddock, Tiff receives a shock from the electric fence following her unsuccessful attempt to climb out. There, she shot and killed Grim the Baryonyx after almost being attacked.[1]

Arriving at The Watering Hole she attempts to shoot the Velociraptor Blue but is held back by Darius and the remaining campers. Tiffany and her husband Mitch are soon forced to flee from the stampeding dinosaurs. The two are pursued by Rexy the T. rex, and in the ensuing chaos Mitch becomes ensnared in his own trap. Unable to untie the knot Tiffany leaves her husband for dead (who soon after meets his death at the jaws of Rexy). Trying to escape on her yacht, she continues to taunt the campers, telling them that they will never make it home and that she will never tell anyone. However, her spiel is interrupted when Tiffany is killed and eaten by Chaos and Limbo in revenge for killing Grim.[1]

The campers find Tiff and Mitch's abandoned boat. However Tiff's dead body is not seen when the campers aboard the boat, which could indicate that Chaos and Limbo threw her body in the water or ate her.[5] She and Mitch are shown in a flashback stopping Darius and Sammy from running away, when Yasmina is thinking about her friendship with Sammy while the latter is on the verge of death due to being poisoned by the Scorpius rex. The campers are eventually able to get off the island, using hers and Mitch's boat, ironically fulfilling the opposite of Tiff's promise that they would never escape the island (on the boat she intended to get away on, no less).[6]

In season 4, Tiff and Mitch's yacht continues to serve as the campers' escape vessel. When Sammy went to check their room on their yacht in search of the stowaway Compy, she found it filled with photos of Tiff and Mitch's travels, some of which depicted the two in less than appealing poses with each other, much to her disgust.[7]

After the Mosasaurus attacked the campers, Mitch and Tiff's yacht was ultimately destroyed and shipwrecked in the process, and the campers were stranded on another island yet again.[7] Tiff and her husband are briefly mentioned by Kenji Kon when he reasons why the campers shouldn't immediately trust Dr. Mae Turner, having learned from their experiences to not trust adults so easily.[8]

While searching Isla Nublar for the kids, Brandon Bowman, Roxie and Dave come across Tiff and Mitch's abandoned campsite realizing that the kids were there. Dave also finds the rotting remains of the couple's Sinoceratops head trophy much to his disgust. 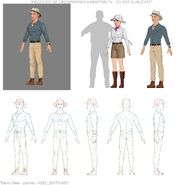 Tiff rescuing the kids with Mitch and Hap

Tiffany showing her and her husband's true color