"I read your book"
—Tim Murphy(src)

Timothy "Tim" Murphy is the grandson of John Hammond who was invited to Jurassic Park because his parents were going through a divorce. In the film, some of his characteristics were swapped from the novel, with those of his sister Lex Murphy. Being John Hammond's grandson, he is second-generation Scottish-American.

In the novel, Tim Murphy is shown to be an 11 year old who turns a blind eye on sports and instead shows interest in computers and dinosaurs. He is apparently the least favorite child of his father, as Lex, his 8-year-old sister, is seen as being an avid sports fan (like her father). He is constantly bickering with his sister, but also tends to her while in the park and shows deep concern for her wellbeing. He is also a fan of Dr. Grant and respects his opinion throughout the book.

After John Arnold and Henry Wu are killed, Tim uses his computer knowledge skills to turn the park's power on once again. He continues to study the system, becoming the most knowledgeable person of the park's mainframe by the end of the novel.

Tim is briefly mentioned in The Lost World, with Ed James, a Biosyn agent, stating that he had started college and his sister was in prep school. Apparently they had lived with their mother on the east coast and hadn't been contacted by anyone from InGen since the incident.[1]

In the movie, Tim is younger than Lex. He has the same interest in dinosaurs as the novel, but his computer hacking skills are given to his sister. He and Lex come to Jurassic Park while their mother is going through a nasty divorce from their father.[2] When Tim and his sister come into the Visitor's Center they greet their grandfather enthusiastically. Tim then meets Dr. Alan Grant, whom he looks up to, and tells him he read his book, and that he wants to ride in the same car as Grant. However, he ends up in the car with Gennaro.

During the tour, Tim is disappointed that neither the Dilophosaurus nor the T. rex show themselves. When Grant and Ellie get out of the cars, Tim, along with the others, follows them and tries to talk to Grant, who isn't listening. There is later a storm heading towards the island and the group has to return to the Visitor Center. However, just as their cars reach the Tyrannosaur paddock, the power cuts out because of Nedry's sabotage. While waiting in the first car, Tim finds a pair of night vision goggles, which he scares his sister with. A loud sound causes the ground to shake, and Tim looks for its source with the goggles, only to see that it is the T. rex, escaping from its paddock. Gennaro runs from the jeep and hides in a bathroom stall. Lex panics and grabs a light. Tim tells her to shut it off, but it has already caught the T. rex's attention. As it is getting close to the jeep, Tim closes the door Gennaro left open. The T. rex hears this and breaks the roof of the jeep. Tim and Lex hold it up before it hits them. Grant, seeing the situation the children are in, exits the jeep and lights a flare to distract the Tyrannosaurus. Malcolm follows suit, but this time the T. rex goes after him instead of the flare, and throws him through the air before finding and eating Gennaro. It then goes back to investigate the jeep. While Lex has managed to escape from the Jeep, Tim is still stuck in it and can't get out. The Tyrannosaurus throws the jeep down and it gets caught in a tree. Lex and Grant look for Tim. Grant climbs the tree the jeep is in and finds Tim. He convinces him to climb out of the car, but in the process, the car starts to come loose and crashes down while Tim and Grant climb down the tree. They manage to avoid getting hit by the car.

After that, the children and Grant hide in a tree for the night, with Grant promising to keep watch. They awake to find a Brachiosaurus near the tree, which fascinates Tim and frightens Lex, who gets sneezed on by the dinosaur. They make their way to the visitor center, but they have to climb the perimeter fence to get there. Tim and Lex try to make a race of it, but just as Tim reaches the top, Ellie attempts to restore the power and the fence flashes a warning, causing Tim to panic. He nearly falls, but manages to get over the fence. Grant tells him to jump, but just as he is about to do so, the power for the fence comes on and Tim is electrocuted. Grant manages to revive him with CPR, and they find their way to the visitor center. The children stay there and eat, but are stalked by raptors and flee into the kitchen. They manage to lock one raptor in the freezer and escape to the control room with Grant and Ellie, but the other raptor follows and tries to get inside. Lex manages to restart security systems just in time, but the raptor still gets inside. They flee to the main room of the visitor center, but encounter the second raptor. Just as they surround the humans, the Tyrannosaurus attacks the Velociraptors and the group can escape. They then join Hammond and Malcolm on a helicopter where he and Lex Murphy fall asleep next to Dr. Alan Grant showing that Dr. Alan Grant may now like kids.

Tim only briefly appears in one scene of this sequel film, when Ian Malcolm comes to meet Hammond at his mansion in New York. He has not appeared in any further sequels.

Tim and his sister appear as adults in the comic series Jurassic Park: Redemption.

Tim and his sister appear in the manga Jurassic Park.

Ellie, Lex and TIm in the Control Room 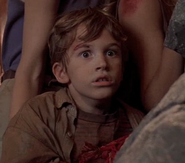 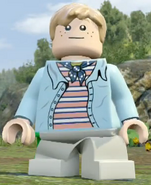