Titanoboa was made creatable in the Cenozoic Park of Jurassic World: The Game on November 24, 2017 as a tournament Cavern creature.

Titanoboa is unlocked by winning a Titanoboa pack from either the roulette or if the player places in the top 1% of the Titanoboa tournament. Additional individuals can be purchased in the market for 11,150 DNA or found through card packs.

"Titanoboa simply means 'Titanic Boa'. As the largest snake ever discovered, these creatures can grow up to 42 feet long!"

"The Earth was much warmer 60 million years ago, which allowed cold blooded creatures like this snake to grow to such a large size!"

"The Titanoboa is so large that it can swallow a crocodile whole!"

"Although it was the largest predator of its time and had no competition from dinosaurs, the Titanoboa ate mostly fish and avoided land prey." 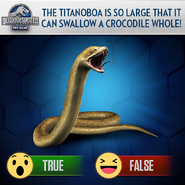 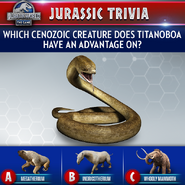 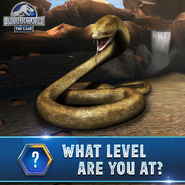 Add a photo to this gallery
Retrieved from "https://jurassicpark.fandom.com/wiki/Titanoboa/JW:_TG?oldid=229949"
Community content is available under CC-BY-SA unless otherwise noted.