Torosaurus is an unlockable dinosaur in Jurassic World: Evolution.

Torosaurus fossils are unlocked once the player ___.

Torosaurus consumes vegetation from ground herbivore feeders, and are capable of defending themselves against their predators.

They form small social groups and prefer fewer dinosaurs of other species near them.

Torosaurus requires a modest area of grassland, with a small amount of forest.

Torosaurus was a ceratopsid dinosaur that lived across the western interior of North America. Its name means 'perforated lizard' because of the large holes in its neck frill.

It has been suggested that Torosaurus is actually a mature form of Triceratops, but this hasn't been proven as yet. Its beak and shearing teeth allowed it to eat tough vegetation, profably ferns.

Torosaurus skulls were first unearthed in 1981 in south-eastern Wyoming, and so far two species have been identified. Remains of Torosaurus have been discovered across much of North America.

The vast range of Torosaurus indicates that it lived in a variety of environments, although they would have favored areas with ranging brush and ground cover. 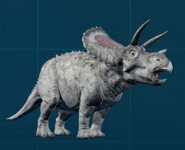 Add a photo to this gallery
Retrieved from "https://jurassicpark.fandom.com/wiki/Torosaurus/JW:_E?oldid=221943"
Community content is available under CC-BY-SA unless otherwise noted.