Egg
Torvosaurus is a large carnivorous dinosaur from the late Jurassic period. it is one of the largest known predatory dinosaurs from the Jurassic. 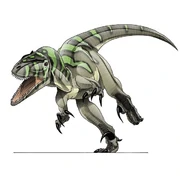 Torvosaurus is featured in the Jurassic World Dinosaur Field Guide.