There were two types of vehicles used on Isla Nublar. Utility Jeeps used by park personnel, and Tour Vehicles (Ford Explorers in the movie or Toyota Land Cruisers in the novel) that ran on electric power delivered through a track in the ground. Their purpose was to drive visitors into enclosures to encounter the dinosaurs in complete safety.

In the novel, the tour vehicles were referred to as Toyota Land Cruisers. They were constructed in Osaka, Japan, custom made for use in the park, thus explaining the low weight and electric engines. Approx. two dozen of them were stored in the Garage, which would've formed an endless loop of tours throughout the island.

They had a spare tire at the back, a special antenna on the roof and inside there were night vision goggles in the glove box, walkie-talkies for communication, and a CD-ROM drive on the main console with a computer monitor which was coordinated with the motion-sensor system to update dinosaur information onscreen. In the garage of the Visitor Center, there were two lanes of Land Cruisers which could transport all the visitors in an endless loop throughout the park, running on tracks buried in the roadway.

During the Isla Nublar Incident, two Land Cruisers were used, BB4 and BB5, and they seemed to have some problem with shifting gears. They passed Hypsilophodons, Dilophosaurus, the Aviary, Triceratops, Tyrannosaurus rex, Apatosaurus, Hadrosaurus and Stegosaurus before they turned around.

After Nedry's shutdown of the park's security system, both Land Cruisers stopped near the T. rex paddock. Vehicle BB4 got attacked by the Tyrannosaurus first, thrown to the side and then lifted into the air, when Lex fell out of the back door. Tim Murphy stayed inside the car which was thrown by the T. rex over the fence into the paddock onto a tree. The second Land Cruiser got attacked afterwards and was thrown to the side.

When Tim Murphy tried to get out of the Land Cruiser on the tree, he had to climb down rapidly because the car followed him and finally crashed to the ground. Later on Robert Muldoon and Donald Gennaro found both Land Cruisers empty. But inside BB4, Muldoon also recognized Tim's digital watch and his vomit. He assumed that at least the boy survived the T. rex attack.

All of the Tour Vehicles in the film version were 1992 Ford Explorer XLTs, but only two were in operation during the Jurassic Park Incident, on their first real test run of the park.

It took visitors on a tour throughout Jurassic Park, passing by the different dinosaur paddocks of the park. Starting at the Visitor Center, they continue off passing through the main gate and continuing on through the Dilophosaurus, Triceratops, and Tyrannosaurus rex paddocks. Due to the oncoming storm, Ray Arnold programmed the Tour Vehicles to return to the Visitor Center, but they never did.

During the Jurassic Park Incident, EXP 4 and 5 were put to a standstill outside the T. rex enclosure when the power was switched off. EXP 4 was attacked by the T. rex, with Lex and Tim Murphy inside it. With Tim still inside, the carnivore pushed the overturned vehicle off a cliff and into a tree. To rescue Tim, Alan Grant went up into the tree. When the branches could no longer hold its weight, the heavy vehicle chased them down the tree with great speed. Luckily, they escaped being crushed to death.

EXP 5 was found abandoned when Ellie Sattler and Robert Muldoon drove to the T. rex enclosure to look for the tour group.

The wreck of EXP 4 would remain in the jungle for the next 20 years until being rediscovered by Owen Grady. It was destroyed shortly afterward by a lava flow from the erupting Mount Sibo.

Each Tour Vehicle possessed a self-navigation system. They had leather interiors, night-vision goggles under the seats, and a drinking tap that supplied visitors with water. Road flares, flashlights and brochures were stored in the trunk. Although the Tour Vehicles were powered by electricity from their track, their lights could have been powered non-stop by their batteries; when the T. rex pushed EXP 04 off the track, the headlights and high beams continued to work. The top speed of the vehicles were 20/12 mph, which wasn't very fast.

The Tour Vehicles appear in all games based on the first film (except the NES and SNES version), mostly as unusable scenery pieces. In Jurassic Park: Operation Genesis, players can build Safari Adventures and drive Land Cruisers into enclosures. However, the Tour Vehicles in this game are operated by a driver: if a Tour Vehicle is destroyed, Robert Muldoon will tell the player that the driver has been killed.

The Tour Vehicle also appears in Telltale's Jurassic Park: The Game, with Explorer 02 being featured near the Triceratops Enclosure, the Visitor Center and eventually chased by a Tyrannosaurus rex. In Bygones, when Gerry and Nima decide to head for the Marine Facility, the car reappears, suffering moderate damage to the rear, like due to the Tyrannosaurus. The vehicle gives them an easy ride to the facility. Gerry later thanks when they catch up with Laura, Billy and Jess.

An immobile tour vehicle appears briefly in the 2015 arcade game in front of the Visitor Center, where the player and his team hunts down a Tyrannosaurus rex.

The tour vehicles appear in the Jurassic World: Evolution expansion "Return to Jurassic Park". As in the original film, the vehicles follow a set path constructed by the player, and allows them a first-person view of their park. They also feature upgrades that enable the use of binoculars, cameras, and night vision goggles akin to the set worn by Tim Murphy. Eventually, the player can unlock a version they can control, drivable off of the track.

It is the Jungle Explorer from Jurassic Park Series 1.

It is one of the Island Explorers made by Mattel from Jurassic World Legacy, available at Target in five-packs or individual packages.

Notice the wrecked Ford Explorer on the left.

Concept art of an unnumbered Explorer from Jurassic Park.

Concept art of the inside of a Ford Explorer

Explorers 04 and 05 at the Tyrannosaurus paddock 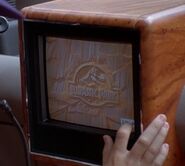 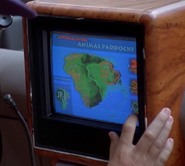