Triceratops is a starting dinosaur in Jurassic World: Evolution.

Triceratops Fossils are available from the start of the game.

Owen Grady: “I see you've hatched a Triceratops. It might be cute now, but that's only going to last for about a week.”

Triceratops has 7 Gap ID slots that can be modified.

Triceratops eat vegetation from ground herbivore feeders, and are capable of defending against predators.

They form one of the largest ceratopsid social groups, although this is still smaller than many other herd herbivores. They tolerate a modest quantity of other dinosaur species in their territory.

They require a modest area of grassland, with a small amount of forest.

The large bony frill and three horns serve to make Triceratops one of the best-known dinosaurs, and this makes it a popular attraction. Its name means 'three-horned face'.

Triceratops was a herbivore. In 2010 a controversial theory was proposed that Triceratops was actually an immature form of Torosaurus, although this has yet to be proven.

The first known Triceratops remains were found in 1887 near Denver, Colorado. Fossil remains indicate that it lived across much of North America, sharing much of the same territory as Tyrannosaurus rex.

Triceratops lived in a range of ecologies, including subtropical inland and coastal regions, and semi-arid plains. 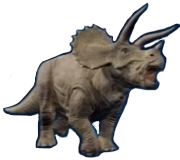 Add a photo to this gallery
Retrieved from "https://jurassicpark.fandom.com/wiki/Triceratops/JW:_E?oldid=231227"
Community content is available under CC-BY-SA unless otherwise noted.