Trinacromerum is an extinct genus of sauropterygian reptile belonging to the plesiosaur suborder. It lived during the Late Cretaceous period in what is now Kansas.

The long flippers of Trinacromerum enabled it to achieve high swimming speeds. Its physical appearance was described by Richard Ellis as akin to a "four-flippered penguin."

Trinacromerum can be created in the Aquatic Park of Jurassic Park: Builder as a limited edition creature.

Trinacromerum can be created in the aquatic park in Jurassic World: The Game. The creature's card said it was a cave, when it is really a reef, but this appears to have recently been fixed. 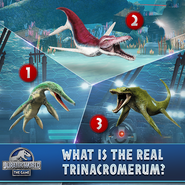 Retrieved from "https://jurassicpark.fandom.com/wiki/Trinacromerum?oldid=209413"
Community content is available under CC-BY-SA unless otherwise noted.