Troodon was added to Jurassic World: The Game on January 4, 2016 as a tournament carnivore.

Troodon is unlocked by winning a Troodon card pack from the roulette, if the player places in the top 1% of the Troodon tournament, or if the player completes the "Clash of Titans" Troodon event. Additional individuals can be purchased in the market for 7,500 DNA.

"Did you know that the Troodon is often labelled as the 'smartest dinosaur' on account of its unusually large brain?"

"While its brain was proportionally large compared to its 75 pound body, the Troodon has the intelligence of an average chicken!"

"Had it not gone extinct, it's speculated that the Troodon might have evolved to a human level of intelligence."

"The name Troodon comes from the Greek for 'wounding tooth' due to its serrated teeth." 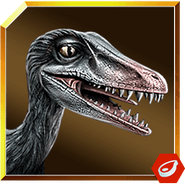 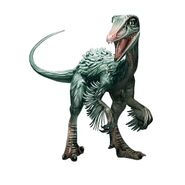 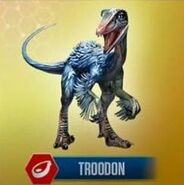 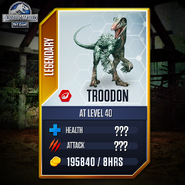 Level 40 Troodon vs Level 40 Prionosuchus
Add a photo to this gallery
Retrieved from "https://jurassicpark.fandom.com/wiki/Troodon/JW:_TG?oldid=231966"
Community content is available under CC-BY-SA unless otherwise noted.