Tropeogopterus is one of the hybrids that can be created in the game. It was originally only encountered in the battle arena with no way of creating it until June 10, 2015. It is first unlocked by fusing a Level 40 Tropeognathus and a Level 40 Zhejiangopterus together. 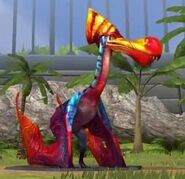 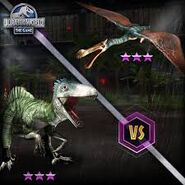 The beak of Tropeogopterus is similar to the Quetzalcoatlus toy that appeared in Jurassic Park Series 2 that was code named "Fire Beak".

Retrieved from "https://jurassicpark.fandom.com/wiki/Tropeogopterus?oldid=209387"
Community content is available under CC-BY-SA unless otherwise noted.