The episode opens with Billy Yoder preparing to kill Laura Sorkin after learning that she knew the poisonous and extremely dangerous Troodon had escaped their pen. However, Jurassic Park's chief veterinarian, Gerry Harding, (or Nima) manages to convince him that the breakout and power failure were not entirely Sorkin's fault, and that she had saved them on several occasions. Meanwhile, Gerry's teenage daughter Jess Harding discovers a grate leading in the direction of the Marine Facility, which is the team's destination, however she shortly afterwards discovers the grate is locked. Nima discovers a gas tank of some sort and informs Gerry that he may be able to use it to bust the grate open. 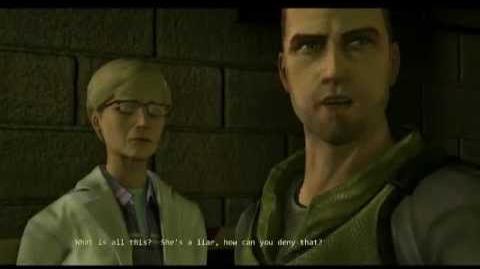 Jurassic Park The Game - Episode4 The Survivors - Trust Issues
Episode 4: Trust Issues
Add a photo to this gallery
Retrieved from "https://jurassicpark.fandom.com/wiki/Trust_Issues?oldid=143952"
Community content is available under CC-BY-SA unless otherwise noted.