Tsintaosaurus ("Qingdao lizard", after the old transliteration "Tsingtao") is a genus of hadrosaurid dinosaur from the Late Cretaceous Period of China. It reached lengths of up to 27 feet long, and weighed up to 2.5 tons, or 5,000 pounds.

A hadrosaur, Tsintaosaurus had a characteristic 'duck bill' snout and a battery of powerful teeth which it used to chew vegetation. Tsintaosaurus, like most hadrosaurs, probably traveled in herds and was semi-quadrupedal and bipedal, meaning it can walk and run on two legs and four legs under certain times.

Like many hadrosaurs, Tsintaosaurus sported a crest on its head. It was originally believed to point forward from its forehead, giving it the nickname "Unicorn of the Cretaceous". More recent discoveries suggest the crest instead pointed backwards and was comparable to its close relative, Lambeosaurus.

Tsintaosaurus appears in Jurassic World: Evolution. Its coloration is mainly tan with dark brown patterning all over the body, with the top of the crest being purple. The shape of the animal's crest is based on its modern reconstructions.

Tsintaosaurus behind an Edmontosaurus while both are behind an Ankylosaurus 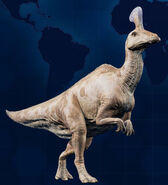 Retrieved from "https://jurassicpark.fandom.com/wiki/Tsintaosaurus?oldid=237446"
Community content is available under CC-BY-SA unless otherwise noted.