Tsintaosaurus is an unlockable dinosaur in Jurassic World: Evolution.

Tsintaosaurus fossils are unlocked once the player ___.

Tsintaosaurus has 9 Gap ID slots that can be modified.

Tsintaosaurus is a hadrosaur which eats moderate amounts from ground herbivore feeders.

They live in large social groups to avoid predation and like to have dinosaurs from other species nearby.

They like good sized grassland with a slightly smaller coverage of forest.

They are vulnerable to all predators.

Like other hadrosaurs it walked on all fours, but was also capable of locomotion on its rear legs alone. They probably lived in herds.

Tsintaosaurus was first discovered at Hsikou in eastern China in 1950. Other remains have since been extracted from the Jingangkou Formation.

The Jingangkou Formation was a dry environment, but one that supported a diverse range of wildlife. 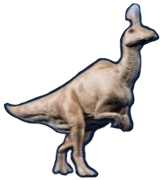 Add a photo to this gallery
Retrieved from "https://jurassicpark.fandom.com/wiki/Tsintaosaurus/JW:_E?oldid=221377"
Community content is available under CC-BY-SA unless otherwise noted.