Tupandactylus (meaning "Tupan finger", in reference to the Tupi thunder god) is a genus of tapejarid pterodactyloid pterosaur from the Early Cretaceous Crato Formation of Brazil. It is notable for its large cranial crest, composed partly of bone and partly of soft tissue. The genus Tupandactylus possibly contains two species, both bearing differently sized/shaped crests that may have been used to signal and display for other Tupandactylus, much as toucans use their bright bills to signal to one another. Tupandactylus crests consisted of a semicircular crest over the snout, and in the case of the type species T. imperator, a bony prong which extended back behind the head. A second species, T. navigans, lacked this prong, and had a much more vertical crest. Soft tissue impressions also show that the small bony crests were extended by a much larger structure made of a keratinous material. The complete crest of T. navigans rose in a sharp, sail-like "dome" high above the rest of the skull.

Tupandactylus is a Rare pterosaur in Jurassic World: Alive added in the 1.4.11 update on September 18, 2018. 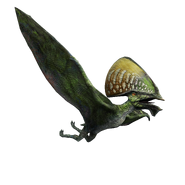 Retrieved from "https://jurassicpark.fandom.com/wiki/Tupandactylus?oldid=238053"
Community content is available under CC-BY-SA unless otherwise noted.