Tylosaurus has a large, strong chest and arms, big flippers, a long body, and a strong tail for swimming. It has a ram-shaped snout and big conical teeth for catching prey. It is a mosasaur, or Meuse River lizard, a true marine lizard. Its food was turtles, plesiosaurs, other mosasaurs, larger fish and shellfish.[1]

Tylosaurus was listed in the website Jurassic Park: Institute on the A-Z Glossary.

Laura Sorkin wrote in her Journal that Hammond cut half of her research funding for 'urgent needs'. A year later Sorkin saw that the funding was used to build the Marine Facility, a glass viewing dome in an underwater cave.[2] She later saw that it housed a Mosasaur. She wrote that "I'd be pissed off about being kept out of the loop, but I'm too excited to care." She writes that the Mosasaur was the first specimen created and was amazed that it was viable. It was grown in a "breeding tank" and was placed in the lagoon of the facility as it had outgrown the tank.[3]

The cloned Tylosaurus had a row spikes running down its neck to its upper back like outdated depictions of mosasaurs from the late 1800s. It also lacked a tail fluke, with another row of spikes covering the tail. The clone's skull was unlike Tylosaurus being as short as the mosasaur Platecarpus with the jaws not being completely straight. The skin color of the cloned Tylosaurus was a shade of blue with black striping and a yellowish white underbelly.

It was nicknamed Jurassic Park’s ‘Devil from the deep’ and was scheduled for Phase II, 6 months after the opening of the Park. InGen had hired marine animal behaviorists to set up security protocols.[4]

It was originally the unnamed marine reptile in the game being only referred to as "Mosasaur". In Laura Sorkin's research journal, she describes the creature and labels it "Mosasaur". She also writes: "Upwards of 50 feet long, depending on genus." From this text it is clear that she doesn't know its genus, indicating that she calls the creature "Mosasaur", she refers to the family to which it belongs; which is Mosasaurs (Mosasauridae). The identity of Jurassic Park's Mosasaur was ultimately revealed to be Tylosaurus in the InGen Field Guide.

Distraught over not being able to call off the planned Costa Rica Napalm Bombing that was to destroy the cloned fauna on Isla Nublar, Dr. Laura Sorkin released the Tylosaurus, hoping that it would survive in the wild. However, rather ironically, instead of escaping the facility it charged right at the rotunda, knocking Dr. Sorkin into the pool on the lower floor of the rotunda, where the Tylosaurus proceed to consume her.

Afterward, Billy Yoder abandoned his group leaving them to die as the facility flooded, giving the remaining survivors no other choice but to swim past the Tylosaur as their only means of escape. Gerry released fish to distract it as they geared up for the dive. In the water, the mosasaur attacked Nima when her oxygen tank became stuck in a log, her rapid movements and Gerry helping her attracting the Tylosaurus. Nima fled to a shark case in retaliation. Though it kept her safe at first, the tylosaur chose to charge into it, but Nima detached it just in time. The Tylosaurus still continued its pursuit of Cruz and went to the cage as soon it hit the seabed where it found Jess whom the tylosaur decided to chase to no success.

The group finally had a chance to escape the Tylosaurus once and for all by maneuvering around the large reptile at the sea caves, where it was unable to find them. Though right before the group could make their escape, the Tylosaurus lunged through the coral that was behind them. As it swam toward Dr. Gerry Harding who was inside its underwater cage, Harding shut the gate down by shooting the compressed air tank above the entrance with his harpoon, ending the chase.[5]

It is unknown what has happened with this individual after the Isla Nublar Incident of 1993.

All video games released so far have outdated depictions of Tylosaurus showing it without a tail fluke and lacking the color scheme that all mosasaurs might have had in real life, which was black with a white underbelly as these features were not discovered around the release of the games below with the exception of Jurassic World: The Game, which came out after the discoveries.

Tylosaurus is number 127 of the Carnivore Threes that can be created in Jurassic Park III: Park Builder. As a carnivore, it should be placed in its own enclosure, considering that if it gets placed with another animal, it will kill it. In-game it looks like a plesiosaur, probably because the game makers didn't have large enough a budget to make its own model.

Tylosaurus appears in the underwater park update for the game Jurassic Park: Builder. 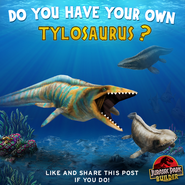 Tylosaurus appears in the underwater section for the game Jurassic World: The Game as a VIP surface creature.

Tylosaurus appears in the game. It is accurately depicted with a tail fluke.

Tylosaurus was originally going to appear in the Jurassic Park animated series.[6] It was to be depicted with crocodilian osteoderms on its back.

In one of the drawings in the InGen Field Journal and InGen Field Guide the Tylosaurus is depicted with its upper jaw being slightly longer than its lower jaw.

The base form Tylosaurus in the Jurassic World: The Game is the same color as the Tylosaurus from BBC's Sea Monsters.