The Tyrannosaur Doe is a female Tyrannosaurus rex that appears in The Lost World: Jurassic Park and the original 1995 novel. She is the mate of the Tyrannosaur Buck and mother of Junior. She can be differentiated from her mate in that she is a brown colour and has less pronounced brows.

The name "Tyrannosaur Doe" is not an official name, but since her mate is called the "Buck", then she must be a Doe, just like a female deer.

The Tyrannosaur Doe was born sometime after or before the recreated dinosaurs on Isla Sorna were freed from captivity when Hurricane Clarissa struck.[1] She and a male of her species had a son[2] in 1997.[1]

During the Isla Sorna Incident of 1997, the Tyrannosaur Doe's son was taken from her by the InGen Hunters where they used him as bait to attract her partner. She and the Tyrannosaur Buck, upon finding their son missing, let out a huge bellow of anger that could be heard on the other side of the island. Immediately resolved to tracking him, they located their child's scent and went to retrieve their captured son. Upon arriving in the encampment, she made her presence known by flipping one of the Gatherers' Mercedes-Benz M-Class SUVs over the cliff the team parked on. She, along with her mate, then reveal themselves to the humans inside the Fleetwood RV Mobile Lab, and make a series of low growls and roars, indicating their presence is for their infant. Despite the infant having been returned to them, the pair decided to destroy the humans as a probable continued threat to their child. They put the young male in a safe place before returning to the trailers. Flipping the rear half of the accordioned vehicle upside down the two proceeded to smash the windshield of the vehicle and then push the rear trailer over the cliff, leaving it hanging hundreds of feet from the rocky shore below. Apparently satisfied with their work, the two leave. However, drawn by the sounds of Eddie Carr's Mercedes SUV, the couple return and the Buck proceeded to dismantle the vehicle before lifting Eddie up and ripping him in half in a tug-of-war with the female before finally devouring him. Despite Eddie's death, the subsequent destruction of both trailers and the remaining SUV, the team were rescued by the InGen expedition team.[1]

Despite having her son returned her, she and the Buck continued to pursue the human visitors because they smelled the blood of their infant that had gotten on Dr. Sarah Harding's shirt when she was repairing his leg, also motivated by their parental instincts. She let her mate go first into the humans' camp, which caused the inhabitants to go into a mass panic. The Female Tyrannosaur then burst out of the brush and ambushed the scattering mercenaries; Roland Tembo, upon catching sight of her, tried to shoot her with his elephant gun (possibly mistaking her for the male, since she was the bigger of the two) but she was saved because Nick van Owen had previously sabotaged the rifle's ammunition. Chasing the terrified mercenaries out of the camp and into the jungle, ignoring the sporadic gunfire aimed at scaring her off, she kills the InGen Hunter, Carter, by crushing him with her right foot after he trips and lands in a puddle. As she continues walking she is unaware that he is still alive and he is eventually crushed to death as the Tyrannosaurus rex continues pursuing his fellow colleagues.[1]

She later found Sarah, Nick Van Owen, Kelly Malcolm and Dr. Robert Burke behind a waterfall, trying to evade her. She stuck her head through and tries to eat them but cannot reach them on account of her large head. Dr. Burke, however, got startled by a snake slithering down his shirt and foolishly ran into the range of the female, who clamped her jaws shut on his arm and dragged him out to be eaten. Apparently satisfied with her meal, she did not resume trying to get at the remaining humans and left.[1]

Her son and her mate were later captured by the Hunters she had fought against and were transported to San Diego, California. However, the Tyrannosaur Doe was soon reunited with the two after the Tyrannosaur Buck broke loose from his cage inside the boat he was being transported in and caused havoc once he had arrived in the city, which led to the human residents returning them back to their home on Isla Sorna.[1]

The animatronic used in the film.

The female lickin the gathers

The doe with her son and mate

Concept art for The Lost World: Jurassic Park depicting a T. rex with a brownish skin color being hauled away in a cage that could be the Doe.

The Tyrannosaur Doe and the Tyrannosaur Buck appear are boss level enemies of the last stage of the arcade game The Lost World: Jurassic Park.

The Female Tyrannosaur appears in The Lost World: Jurassic Park for SEGA Genesis in the level "T-Rex Chase". She is also featured on the cover of the game.

The Tyrannosaurus female appears on the cover of the Game Boy game The Lost World: Jurassic Park, but does not actually appear in the game herself. 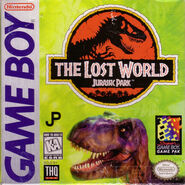 The female Tyrannosaurus was in LEGO: Jurassic World and did many of the same things that she did in The Lost World: Jurassic Park. Like all the other dinosaurs, the female T. rex sometimes participates in humorous antics, due to the game's comical nature.

The female Tyrannosaur and her mate.
Add a photo to this gallery

The Thrasher T-Rex toy from The Lost World Series 1 toy line is based on the Tyrannosaur Doe. It is considered by many to be among some of the best toys produced for the Jurassic Park Franchise because of toy's high amount of playability. Unlike the film, the color scheme of the Thrasher T-Rex has a green-brown coloration (which color is more prominent depends on the variation in the toy), with black striping whereas the female in the film is brown with darker striping over her snout.

There is concept art that exists for The Lost World: Jurassic Park that depicts a T. rex with a brownish skin color in a cage being hauled away. Though the ILM website states that this concept art is for the first film Jurassic Park,[3] the concept art can be proven to actually come from The Lost World: Jurassic Park due to the bottom right corner of the art having the words "Lost World". Because the T. rex in the concept art is in a cage and is brown instead of green like the Buck who was captured in the final film, this is because in the original ending both of the tyranosaurs were brought to san diego, however this was cut for unknown reasons.

Retrieved from "https://jurassicpark.fandom.com/wiki/Tyrannosaur_Doe?oldid=241666"
Community content is available under CC-BY-SA unless otherwise noted.