"QUIET all of you...they're approaching the tyrannosaur paddock!"
—Robert Muldoon(src)

The Tyrannosaur Paddock was a location featured in both the novel and movie. It was built to house two Tyrannosaurs: one adult and one juvenile, though only the adult was in the paddock before the park failed. It was the primary attraction for the park, and the first one to fail. It had a moat to stop the T. rex from crossing as well as a food elevator that transported goats up to the enclosure. It is the largest enclosure in the movie.

It was also the first enclosure that was being repaired when Arnold believed he had the park under his control.

It also housed the Tyrannosaur Paddock Bathroom, which was destroyed by the escaped adult and resulted in the death of Donald Gennaro. In both the novel and movie canon, the paddock encloses an area of dense woodland, presumably as cover so the tyrannosaurs would remain hidden while stalking their food. It is located on the northern part of Isla Nublar in both the novel and movie, the paddock is centered beside the Triceratops Paddock, Velociraptor Paddock including the Dilophosaur Paddock & Baryonyx Paddock in the movie. 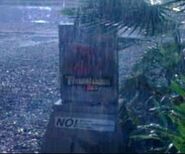