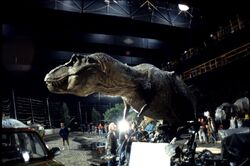 Of the two that were constructed, one was a thirty-seven-foot long, full-sized animatronic, and the other was more precision based and built only from the torso up. Both were controlled by telemetry devices.

For the film, Stan Winston Studios was chosen for the construction of the life sized animatronics, with the decision based on the effects firms’ previous work on James Cameron's 1986 action/sci-fi film, Aliens, where the company constructed a life sized, 14 foot tall norget man Queen puppet. Working in collaboration with Mark Hallett, Robert Bakker, and Gregory S. Paul, Mark McCreery was tasked by Stan Winston to draw up designs for the ERR.

In the concept art, Stan Winston wanted dynamic poses and other depictions that would express the endothermy of the film’s non-human stars. This entire concept design stage took an entire year to complete. Meanwhile, in preparation for the construction of the gigantic full sized animatronic, Stan Winston Studios purchased a next door building and had a section of the roof raised thirteen feet in order to accommodate the prehistoric proportions of the full sized, twenty foot tall maquette. From here, Stan Winston Studios began the daunting task of constructing a full sized maquette from modelling clay that would be used in the molding of the foam latex skin that would go over the interior hydraulics.

To construct such a maquette, mechanical department coordinator Richard Landon first built a sixteenth scale maquette used primarily for color scheme concept and a fifth scale maquette that was used to construct the shape of the full scale maquette. The interior armature, of which Richard Landon was also in charge of constructing, was crafted from steel and wood in the general shape of the maquette. From here, chicken wire was laid over the frame and then fiberglass sheep and hardware cloth over the chicken wire in order to give the armature shape.

The maquette was constructed from 3 tons of Roma clay, with the main body sculpted by Joey Orosco, Mark Jurinko, Bill Basco, Robert Henderstein, and Greg Fiegel. The legs were sculpted by Len Burge and Christopher Swift, while Michael Trcic was in charge of the head and neck (Trcic also constructed the skull for the animatronic later in the process), and the arms were sculpted separately from the body. Sculpting of the clay took sixteen weeks in and of itself. Because of the weight of the clay maquette, the exterior aluminum frame that was used to support the maquette had to be switched out for steel.

The full sized animatronic was initially designed by Disney Imagineer Bob Gurr, who knew instantly the the project would require hydraulics. Initially, Stan Winston wished to construct the full sized Tyrannosaurus as a life sized puppet, but early tests of the idea quickly nullified the notion. Stan also wished to use an electric motor based system, however the electric motors of the early 1990s would not give the animatronic the speed that Stan Winston wanted. In the end, Stan Winston too decided upon the use of hydraulics to fully bring the character to life.

The animatronic was built on a main base of a device based on designs for flight simulators custom built by McFadden Systems for SWS. The motion based platform that would provide the gross movements for the animatronic that would be built upon it. The platform could be controlled by a four-person operated telemetry device, dubbed “Wally”, which was a miniature of the motion based platform. Before either the platform or the animatronic would be built, however, the floors of both the SWS shop and of Stage 16 where the animatronic would be used had to be specially reinforced to handle the expected weight of the animatronic. The animatronic was constructed of steel, though aluminum and other materials were considered. The decision was made when Stan Winston asked welder Armando Gonzales what material would be the easiest to repair should the animatronic break down during production. Gonzales was also responsible for final welds on the rig, buffing and dulling any sharp points or corners on the armature that could have any chance of puncturing the foam latex skin that would later go over the graphite-fiber frame.

The portions of the frame that provided

large movement, such as the neck and tail, were constructed through spiral rings. Rather than separate circular rings that were commonly constructed by animatronic makers of the day, the spiral rings did not let the frame slide or bunch up in places and therefore was more stable. However, because Newtonian Laws still enacted upon the character, SWS fitted the animatronic with an accelerometer, to stabilize the animatronic in gross movement, which could reach 90 inches per second. The skin overlaying the frame was two inch thick foam rubber, and was cast in sections in order to be fitted onto the animatronic. Because of this, more foam rubber had to be cast in order to fill in the gaps. In the end, the entire full sized animatronic weighed 4.5 tons[1], was nearly 40 feet long[2][3], and could raise itself 24 feet into the air[4], close to, if not a bit larger and heavier than an actual Tyrannosaurus rex. The fifty-seven functions and movements on the character were all hydraulic based, save for the eyes which were radio controlled.

One unfortunate night, the overnight crew had to call an emergency meeting when they discovered the bottom jaw had broken on the animatronic. Through half the next day, Stan Winston and his crew took time to repair the animatronic, meaning no filming took place that day. Despite all the water problems, the animatronic performed fantastically well, allowing director Steven Spielberg to shave four days off of the filming schedule.

Built only from the waist up, a second animatronic was created for close up shots and intense interaction with the Tyrannosaurus. Because of its need for close-ups, the skin on this animatronic was more detailed, as was the paint. It had very limited animatronic functions, but was also heavily built.

The animatronic also utilized an incredibly precise, computer based “action memory” that could be used to preprogram movements into the animatronic that could be repeated with perfection multiple times. This action memory allowed the Tyrannosaurus to push herself through the bathroom hut wall without harming Donald Gennaro (Martin Ferraro) inside.

The Tyrannosaurus was among the most complex sound concepts for the Jurassic Park franchise. As Spielberg wished for the film to be something more than ‘another monster movie’ and to truly represent the dinosaurs as living animals rather than prehistoric beasts, Gary Rydstrom was tasked with finding as many original sound sources as possible in order to give the Tyrannosaurus more than just a single repetitive roar as was the norm for previous dinosaur films.

For the sound crew, Rydstrom recorded samples from baby elephants, alligators, lions[citation needed], tigers, whales, and even sourced from Rydstrom’s pet Jack Russell terrier, Buster. The famous roar of the Tyrannosaurus was created through mixing the sounds with a base sound of a trumpeting baby elephant. Growls and various rumblings were made through mixing of the alligator and tiger. The snorting was the sound of a whale’s blow hole exhaling. The growling sound made when the Tyrannosaurus shook a Gallimimus was the sound of Buster playing tug-of-war with a rope.