Jurassic Park: Builder
Jurassic World: The Game
Uintatherium is an extinct herbivorous mammal that lived during the Eocene epoch. They were similar to today's rhinoceros both in size and in shape, although they are not closely related. The Uintatherium had a small brain compared to its body.[2] The small brain of the Uintatherium suggests that it wasn't really intelligent.[3]

Uintatherium can be created in the Glacier Park section. It is usually the fifth animal in the Glacier Park, created in Kelly's mission Camera Shy. Its DNA is found in the South Patagonian Ice Field despite all fossil remains being found in North America and China. Also, since Uintatherium lived in the Eocene Epoch, it did not live in the Ice Age at all, thus placing it in a tundra habitat is inaccurate. 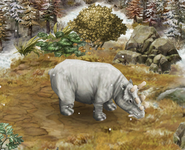 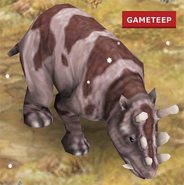 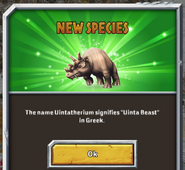 Uintatherium appears in the Cenozoic Biosphere of Jurassic World: The Game as a Legendary (previously Rare) Savannah creature.