Ultimasaurus is a hybrid from the cancelled Kenner toy line Jurassic Park: Chaos Effect. It is made from the DNA of Tyrannosaurus rex, Triceratops, Velociraptor, Ankylosaurus, and Stegosaurus, making it a deadly fighting machine.

Its appearance gives it the frill and horns Triceratops, head and body of a Tyrannosaurus, the arms and legs of a Velociraptor, the back armor of an Ankylosaurus, and a spine-tipped tail of a Stegosaurus. Its skin is primarily gray with a light yellow underbelly, black stripes on its back and armor plating, yellow markings surrounding the eyes, and a red head and feet. The way the lime green eyes are placed on the head gives it the binocular vision of a Tyrannosaurus. It was bred to be the most deadly of all the Chaos Effect hybrids, but proved to be extremely unpredictable. Unfortunately, the figure was never released due to the fact that the Chaos Effect line sold poorly and some rumors also state that the horns were too long and sharp. However, an infant Ultimasaurus did come with one of the human action figures in this toy line, perhaps as a reference to Junior from The Lost World: Jurassic Park. An image of Ultimasaurus can be seen on many figure card backs, referencing that it would have had movable jaws and claws.

A repaint of this toy was planned for the Night Hunter Series, but was cancelled.

The design of the Tyrannopede, an alien from the Ben 10: Omniverse series, was based on this toy. According to the show's art director Derrick J. Wyatt, the scientific name for Tyrannopede's species is Kaosseffexx ultimasauria (the species name refers to the Ultimasaurus, while the genus name refers to the Chaos Effect toy line) and their family and parental behavior is similar to that of the Tyrannosaurus parents from The Lost World: Jurassic Park.

Many fans have noted the similarities between Ultimasaurus and the Indominus rex, another hybrid from Jurassic World, especially in terms of purpose.

Fans have noted that the hybrid, Pachygalosaurus in Jurassic World: The Game looks like Ultimasaurus, as well as the Jurassic World Alive’s Allosinosaurus and Thoradolosaur. 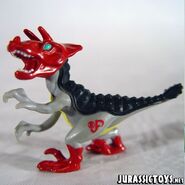 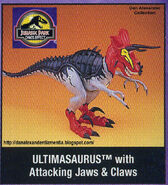 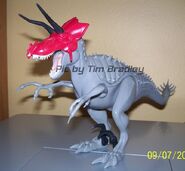 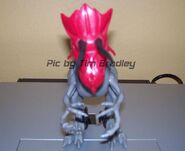 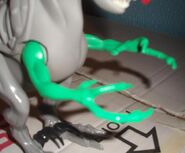