Unaysaurus is a genus of sauropodomorph herbivore dinosaur. Discovered in southern Brazil, in the geopark of paleorrota, in 1998, and announced in a press conference on Thursday, December 3, 2004, it is one of the oldest dinosaurs known. It is closely related to plateosaurid dinosaurs found in Germany, which indicates that it was relatively easy for species to spread across the giant landmass of the time, the supercontinent of Pangaea.

Like most early dinosaurs, Unaysaurus was relatively small, and walked on two legs. It was only 2.5 meters long (8.2 ft), 70 to 80 centimeters tall (2 to 3 ft), and weighed about 70 kilograms (155 lb), it would be a fast animal which would be key in helping it escape predators.  It shares also a key trait among early theropods : a slender build.

The fossils of Unaysaurus are well preserved. They consist of an almost complete skull, complete with a lower jaw, and partial skeleton with many of the bones still connected to each other in their natural positions. It is one of the most complete dinosaur skeletons (including complete skull) ever recovered in Brazil.

Unaysaurus is a herbivorous dinosaur in Jurassic World: The Game. It has the model of Gallimimus and Pelecanimimus when in reality, it looked more like Plateosaurus. 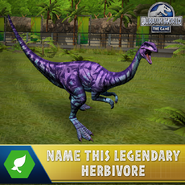 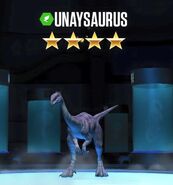 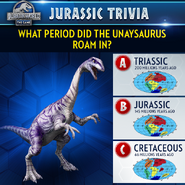 Retrieved from "https://jurassicpark.fandom.com/wiki/Unaysaurus?oldid=237427"
Community content is available under CC-BY-SA unless otherwise noted.