Hello I’m Dinoanime7, I’m Dinoanime but my computer crashed so yeah. I love dinosaurs and other things. I love memes as well and like making new friends.

I have a Wattpad account named Animationking. I work on stories like Who Would Win, Jurassic World: War of Extinction, and Neo Primeval World.

If you want to join my Discord sever, well here's the link:

Make sure you read the roles there.

Make the film be over 3 hours.

Having a masterpiece dialogue.

Seeing the impact of dinosaurs being introduced to the ecosystem.

Have the film focus on Rexy.

Let Blue have some offsprings before dying.

Rexy survives the film, but after the film Rexy shouldn’t be mentioned ever again. Just her legacy.

My Ideas for Jurassic World 3

1. Having a scene with dinosaur bounty hunters on the mainland, while they are hunting, they were attacked by a new Spinosaur species, Irritator one was killed, but the other was seriously injured and was mauled. The Irritator stands on top of the woman senses her and leaves her alone knowing that she is no longer a threat to her cubs.

2. Mosasaurus impact on ecosystem and perhaps have a seen where they discovered a new Mosasaurus, this was in fact a baby from the original Mosasaurus who is asexually reproducing. Boat scene happens since Mosasaurus is trying to defend her calves.

3. A scene a Spinosaurus was found in Asia and was hunting an elephant, killing the elephant and eating it.

5. Other marine reptiles appear but they won’t play a role as big as the Mosasaurus.

6. Rexy meets an accurate T.rex who is slightly smaller than her. At first she doesn’t accept him although at the end of the film they become mates.

7. Blue has children after breeding with a 1997 variant male Velociratpor. She has three children, Green, Red, and Violet.

8. A disease being introduced and causing some serious havoc on humanity.

9. Film ends with the dinosaurs ruling many parts of the world.

10. After credit scene shows a baby Rex hatching out of it’s egg.

Blue Whale (Like to see it fight a Mosasaurus)

New Dinosaurs I want to see Appear in JW3

Brontosaurus (Seeing it have neck spikes)

Dinosaurs I would like to see Return in JW3

Alamosaurus (Seeing it in flesh, it appeared in JP as a skeleton, at least a cameo at the end)

Allosaurus (Want to see the mature Allosaurus from Battle At Big Rock, with it’s family)

Apatosaurus (Seen in the film, perhaps even seeing an accurate variant of the species)

Brachiosaurus (Perhaps seeing a herd of them)

Carnotaurus (Has some sunshine and accurate variants cloned by open sourcing)

Ceratosaurus (Makes a cameo appearance in a cave)

Corythosaurus (Mentioned, later seen in the film, brought back by open sourcing)

Dilophosaurus (Fully grown, this time with an accurate skull and arm positions)

Teratophoneus (Seeing them alive, perhaps seeing a female trying to protect her nest from a Carnotaurus, possibly seeing new clones)

Triceratops (And seeing new clones made by someone)

Tyrannosaurus rex (Rexy and new Tyrannosaurs based on Saurian T.rex)

Dinosaur designs for the new individuals made by open sourcing: 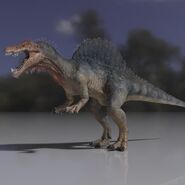