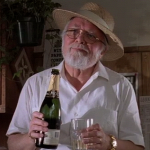 "What are you talking about? Do you have any idea what this means? -Henry Wu

"Of course I know what it means, Henry! It means you screwed up!" -John Hammond

I've been a Jurassic Park fan for as long as I can remember. Going on vacation, watching the film with my family, making it an instant classic for years, making games about it, etc. I first read the novel with my father when I was in 3rd grade, and loved it. It was like reliving my favorite movie in an even more extraordinary way. More detail, more depth, and overall, more storyline. As my username suggests, my favorite character in the franchise is John Hammond. I liked the novel's version of Hammond better; "Hammond was flamboyant, a born showman"

Crichton even says "I really wanted to do the 'Dark-Side' of Walt Disney... And well, Steven is more forgiving than me...". Though he was meant to be the antagonist of the novel, I still consider him the best character in the series. Also, I've always pictured him in apperance to Richard Attenborough, and I feel the film portrayed him fantastically. I know nearly everything to do with this franchise, and have always considered myself a true expert.

I'm an administrator for this wiki, and I've mainly started to focus my Jurassic Park knowledge on Michael Crichton's original novels. Though the films are my favorite movies, I still remain a true fan of the novels. The novels offer a more in-depth look on characters, structures, backrounds, and just plain detail. I believe Spielberg did a fantastic job with the movies, but the characters do have their differences. Do you prefer to feel Hammond's pain in the movie, or would you rather imagine his ironic death in the novel? The first time I read the novel, I didn't understand the concept of his death. But after reading the novel several times, I really do see the point of this fantastical tale. The ironic death of the egomaniacal hustler that arrogantly believed he could recreate and control life; however, I really don't see why today's society has made the lust for money and success a crime. That's all Hammond really wanted in the novel, and I, and basically everyone else in the world wants exactly that. Personal gain. I'm self absorbed, sure, which is one of the reasons Hammond's my favorite character; he reminds me of myself. That doesn't make me a bad person, it makes me over-confident, and sometimes reckless. That's simply human nature. Back to the topic, when I read the books, I somewhat see the characters in the novel as they are portrayed in the film; when Hammond is walking to his bungalow in the novel, I imagine Richard Attenborough strolling down the path, hearing the Tyrannosaur's roar, going into an all-out sprint panic, snapping his amber cane in the fall down the dense hill, and breaking his ankle when hitting the ground. He's a more arrogant version of Attenborough, but I can only imagine him in that role, no one else.  I've always pictured Jeff Goldblum as Malcolm, Laura Dern as Sattler, etc., but I find differences in Grant and Muldoon. Those are basically the only two characters that don't fit their film adaptations. If you read the novel, you'll see what I mean. With the films, every line is a memorable quote; "I've got a jet standing by in Choteau!" (said quickly and loudly), "Really spectacular, we spared no expense!", or even "Hold' onto your butts!"

Every kid born into the 90s knew that dinosaurs were awesome... It was a time of amazing realism and story from Universal Pictures. As for myself, I never really felt that I preferred a specific dinosaur when I was younger, but always loved the carnivores. However, as I got older, I started to really enjoy the peaceful herbivours in the Jurassic Park Franchise, most memorably in the most famous scene in the films, Welcome to Jurassic Park. That scene really showed me the awe of the mighty sauropods, the graceful hadrosaurs, and the cautious duckbills. It was after several years that I finally chose my favorite dinosaur, the Apatosaurus, a medium-sized sauropod from the Jurassic Period. It appears in the novels, with their graceful long necks and powerful tails, no carnivore even dared attack them. They don't appear living in the film franchise, which I'm actually happy about; in Jurassic Park ///, CGI editors butchered the Brachiosaurus by over-editing it's face and apperance. In Jurassic Park, the Brachiosaur was perfectly edited, making a beautiful creature and believable animal, which JP/// failed to. I feel that if an Apatosaur appeared living in the films, editors would again butcher their majesty, so I prefer to leave it to my imagination in the novels...

Retrieved from "https://jurassicpark.fandom.com/wiki/User:John_Alfred_Hammond,_CEO?oldid=70704"
Community content is available under CC-BY-SA unless otherwise noted.