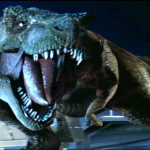 Obviously a huge Jurassic Park fan, the first movie being my favorite. If I had to rank them in terms of enjoyment, I'd rank them in their order of release. Tyrannosaurus is my favorite, with Spinosaurus being a close second. I'm pretty nitpicky about the dinosaur sizes, especially the carnivores, and I've done more research on that aspect than I care to admit; I've also got several of the JP/JW books if you ever need to know something from them.

I have a YouTube channel. Check it out and join me in talking about this amazing franchise.

- According to Johnston, Michael Crichton was not involved in JP3 but Steven Spielberg was a part of the writing process and was around if Johnston had any questions.

- Two versions of the story were dismissed before settling on the one seen in the final product. The first idea was a group of teenagers getting stuck on the island (sort of like the second JPA junior novel) written by Craig Rosenberg, but everyone decided it wasn't what they wanted to see. The second idea was to have Grant and Billy accidentally crash on the island along with a family. The second idea got as far as budgeting, storyboarding, and location scouting. This was the script that was thrown out five weeks before shooting when David Koepp came up with the idea used in the film. They had so much planned for the second idea that they had to incorporate quite a bit of it into Koepp's story (like the aviary scene).

- There was never a finished script until after filming wrapped. Pages were written on the day of or sometimes up to a week ahead.

This is a document I made for when I need to reference a dinosaur's size, including the source. I've tried to keep up to date with the canon sources, but the "expanded" lore is outdated as there's simply way too much for me to collect right now.

Obviously this is my opinion. I'm ranking the movies based on my overall enjoyment and my perception of their quality.

I'll add some insight at a later time.

This is just about everything I currently could find on the Tyrannosaurus rex in relation to Jurassic Park, although I know I'm missing plenty of video games and trading cards.

Retrieved from "https://jurassicpark.fandom.com/wiki/User:KamikazePyro?oldid=231723"
Community content is available under CC-BY-SA unless otherwise noted.