Laguma was an aggrressive Velociraptor that was trained along with Red by Owen Grady in 2023. She is known for being responsible for the death of Blue. She's slightly younger than Red.

In the film Jurassic Galaxy, Laguma is exactly identical to the raptors from Jurassic Park and The Lost World: Jurassic Park, being brown in colour. As a baby, she was a dark green color. She also wore a yellow bracelet around her wrist.

In all of Laguma's toy depictions, she has a slight black tan which her film counterpart lacks.

"That's our new baby raptor, Laguma. She can be quite aggressive with the other raptors, often physically scarring them."
—The tour guide addressing the crowd about their new baby raptor([[|src]])

Laguma was the second Velociraptor to be created by InGen in 2021. She was created using more Indominus rex DNA. She was seen in the Dino Hatchery in California in Jurassic World III. She belonged to the second pack consisting of her and Red. She and her pack were trained by Owen Grady, who imprinted on them in their birth. It is assumed Laguma was the alpha of the pack because of her aggressive personality.

On a return trip to Isla Nublar in 2023, Owen Grady and his team sent with him three Velociraptors, Laguma, Red and Blue, to survey the island for any surviving dinosaurs.

They soon gave up and after hearing a faint roar, some dinosaurs including Brachiosauruses and Triceratopses were found stranded on a remote island. Lava surrounded the island and, after Blue and Laguma got into a fight, Laguma eventually pushed Blue into the lava and she died. Laguma was shouted at but got scared and fliched backwards but she stumbled on a burning cinder and fell into the lava and drowned. Red became aaggressive but Owen told her to stop and she attacked Owen and he nearly fell back and into the lava.

Laguma abhorred Blue since her birth around 2021. They always argued and they wanted each other dead, as seen with the Dino Translater Owen used on the surviing raptors.

Owen is seen to be loyal to Laguma.

A vinyl model of Laguma hatching out of an egg was released in 2020 as part of the Jurassic World III toy line. 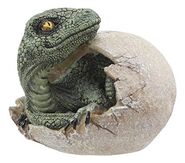