Sonic in Jurassic Park (abbreviated as Sonic in JP) was an animation by Balenaproductions that was in development created by Steven Page for the Balena Productions YouTube Channel. On March 27th, 2015, it was announced that it was delayed until July 3rd, 2020.

The project started in 2008. After the success of 'Sonic in Glitch-Hog', Steven Page (the creator of the Balena Productions) wanted to practice making videos and movie parodies seemed to be the best bet. He wanted to do Jurassic Park first, but he needed to practice. JAWS was easier so he made that.[1]

After Sonic in JAWS was a bigger hit than Glitch-Hog, it was time to make Jurassic Park. Problem is at the time there weren't many dinosaur models or JP assets. To avoid using sub-par so he waited and worked on other things. Fan demand began and so the script started being worked on. The best dinosaur models at the time were from the 2009 Turok game and so he created a teaser with them and the hype began for the viewers.

Just as things were starting to ramp up Universal announced a partnership with telltale games to make games based on Back to the Future and Jurassic Park. Now the possibility of Jurassic Park models was real. ApocHedgie was commissioned to port the models to Garry's Mod. At first he had trouble and had to manually rip one at a time but then his brother RandomTBush wrote a script and was able to port everything that was needed within a week.

The project began to fell apart as people who were commissioned to create Maps began to not show any results. And there were some major issues in the script as well. The Project was eventually canceled so Balenaproductions could move on and create better projects.

On February 26, 2020 Sonic in Jurassic Park T-Rex Breakout was announced as a reward for the Balenaproductions channel reaching eight-hundred thousand subscribers. It will be a full animation of the most iconic scene from the original Jurassic Park film. It is released on June 3, 2020.[2]

If this video preforms well-enough on YouTube Balenaproductions may animate more scenes from Jurassic Park, The Lost World, and possibly even Jurassic Park 3.[3]

A tropical monsoon storm hits the island, and all the power is out. As a result, the Tyrannosaurus breaks through the deactivated electric fence surrounding its pen, devours the stranded goat, and wrecks havoc upon the roadway, attacking Tails and Amy hiding in the car, who was left alone by Conker after he fled. Sonic ignites a flare to lure the T-Rex away from the kids, but Knuckles inadvertently intervenes, only for himself to be chased to a restroom, where Conker is hiding. The T-Rex brings down the hut, breaking Knuckles' leg, but smells a malodorous smell from the toilet as Conker escapes. Amy and Sonic battle the T-Rex, while the broken Explorer manned by Tails is pushed over the edge of the enclosure and plunges into a tree below. 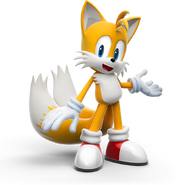 Tyrannosaurus Rex (Isla Neblar)
Add a photo to this gallery

Sonic: [closes door of Amy's Tails' and Conker's car and races back to his and Knuckles car] Well, it looks like their radio's out, too. Guess we just... wait.

Knuckles: [Puts his hat on] Spare no expense indeed.

Amy: [Having trouble with her cell phone] No signal anywhere. All day.

Tails: [grabs a pair of binoculars and looks thru them] Cool. [looks all around]

Conker: I don't feel so good. Ugh... Taco Tuesday's coming back for revenge. [Rushes out of the car and into a restroom] Gotta go!

[Knuckles was fast asleep, although Sonic wasn't. Tails was still looking around thru the binoculars when he heard loud footsteps.]

Tails: Do you hear that?

[Tails looks thru his side of the car with his binoculars, but there's no sign of the stranded goat. And he gasped]

Tails: The goat is gone!

Sonic: What're they looking at?

Knuckles: The fence, you don't think... [Looks up to see the electrical fence wobbling, then being tipped over. The Wires are then cut by the T-Rex she breaks out]

[Amy pulls out a flashlight]

Amy: I have to see if Sonic's okay!

[The flashlight from Amy's and Tails' car shines on Sonic's and Knuckles car, but the T-Rex saw it.]

[The T-Rex walks to Amy's and Tails' car]

Tails: Turn the light off!

[The T-Rex stops in front of Amy's side of the car, staring at the two children. Then she pushes the door wide open with his head. And Amy was so scared of the T-Rex, shining the light on the T-Rex's eye. Amy and Tails looked at each other, worried. Suddenly...]

[The roar was so loud, Amy and Tails covered their ears in fear.]

Tails: [turns off the flashlight] There.

[The T-Rex attacks the car, when the two by pushing it, causing it to roll over, smashing the top on the ground.]

Sonic and Knuckles: NO!

[The T-Rex stepped on the car, tearing off a tire. The car was being pushed down by the T-Rex]

Sonic: We've gotta do something!

[Sonic opens a box, and grabs a flare]

[The T-Rex dragged the car with her jaws, lifts the car a little while but drops it.]

[The T-Rex stares at Sonic holding onto the flare]

Knuckles: GET AMY AND TAILS! [Runs off as the T-Rex follows him]

Conker: [chuckles] Hope nobody goes in there. Huh?

[The T-Rex knocks Knuckles down, unconsciously, and breaks down the bathroom. The T-Rex was standing in front of Conker staring at him]

[The T-Rex smells something, but roars in disgust, because the smell of the toilet smells bad.]

Conker: [runs away] I've already been eaten once before. That's enough for me.

Sonic: [Pulling a dirty Amy, although a dirty Tails is stuck] Come one... Almost there... Get me your hand, Tails.

Tails: [grunting] My feet are stuck under the seat.

[Amy is still gazing at the T-Rex, coming up to their car in horror, and Sonic and Amy hides behind the car, before pushing the car.]

[Sonic and Amy backs up to the ledge, as Amy's head touches broken wires.]

Sonic: [grabs a broken wire and holds Amy tightly] Hang on! [Jumps off the ledge]

[The cars Tails is still stuck in keeps getting pushed by the T-Rex, until it falls off the ledge into the trees below with a crash]

Sonic and Amy: TAILS! [looks up at the T-Rex still staring at them, before turning her head around]

Retrieved from "https://jurassicpark.fandom.com/wiki/User_blog:OperaSinger/Sonic_in_Jurassic_Park:_T-Rex_Breakout?oldid=245058"
Community content is available under CC-BY-SA unless otherwise noted.