Utahraptor is the oldest known, and largest, of the dromaeosaurids. At two meters height and seven meters long, they are the size of polar bears. One of the most unique aspects that Utahraptor shares with its more famous cousin Velociraptor is that both had a lethal killing claw on each foot. Each inside toe had a large hooked claw (about 10 inches long) that was controlled by a strong tendon. This claw was held upward when the animal was walking or running. When it attacked, however, the tendon snapped tight and the claw clamped down with great speed and force, slicing deeply into its victim. Not a very pretty picture, but an effective way to inflict a serious wound. Its hand claws were proportionally larger, than other family members and Dr. Kirkland speculates that its hand claws were probably as important a weapon as the killing claws on its feet.[1]

When the movie Jurassic Park was released, dinosaur fans everywhere complained that director Steven Spielberg had made his movie Velociraptors much larger than they were in real life. In the midst of this controversy, Dr. James Kirkland and paleontology student Rob Gaston unearthed the real-life giant raptor that was shown in the movie, only bigger. Utahraptor was huge, and with its big killing claws, strong arms and hands, and sharp teeth, it was one of the most ferocious killers on the planet.[1]

Jody Duncan wrote about this discovery: "Later, after we had designed and built the Raptor, there was a discovery of a Raptor skeleton in Utah, which they labeled 'super-slasher'. They had uncovered the largest Velociraptor to date - and it measured five-and-a-half-feet tall, just like ours. So we designed it, we built it, and then they discovered it. That still boggles my mind."[2]

Screenshot of a Raptor in Jurassic Park for Sega CD.

Utahraptor served as the final boss before Anne can be rescued off of Site B.

Utahraptor can be created from paleo-DNA in the game Jurassic Park III: Park Builder.

Utahraptor can be created in Jurassic Park: Builder. At first, it could only in the Jurassic card packs purchasable by real money. Since February 12th 2016, it became a DNA tournament limited edition. Unlike most dromaeosaurids in the Jurassic Park franchise, this depiction of Utahraptor has fur feathers all over its body and even wings. 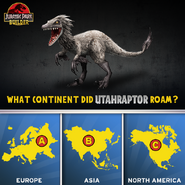 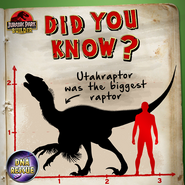 Utahraptor can be created in Jurassic World: The Game. Unlike most dromaeosaurids in the Jurassic Park Franchise, this depiction of Utahraptor has fur feathers all over its body, making it the first dromaeosaurid to be fully feathered in the franchise, although in the same game, Pyroraptor had fur like feathers and even wings. 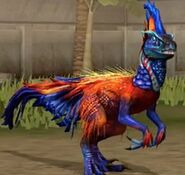 Utahraptor is featured in Jurassic World: Alive. Unlike most dromaeosaurids in the Jurassic Park franchise, this depiction of Utahraptor has fur feathers all over its body and even wings. 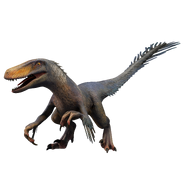 A Utahraptor called "Ripper' appears in the toy line Jurassic Park Series 2. It can make a slashing motion with one of its legs and can make an electronic screech.

Close up of the head

A Utahraptor appears in The Lost World Series 1. It comes with a "Dino Tracker" figure and capture gear.