Velociraptor is an unlockable dinosaur in Jurassic World: Evolution.

Velociraptor fossils are unlocked once the player has 2 Expedition Centers.

“Look, raptors get a bad rap because people don't understand that they are, and will always be, alpha predators. Our job is to help them... the raptors... understand that we are as well.”

"The Velociraptors history with InGen has been a troubled one, in part because they're often underestimated for how clever and dangerous they can be."

"Velociraptors were once part of a project where Owen Grady and his team trained them to obey commands."

Velociraptors are carniverous small therapods who will eat from any source of meat.

They form one of the smaller of the small therapod social groups,and don't tolerate too many dinosaurs of other species nearby.

Velociraptors need a reasonable area of grassland, as well as some forest to thrive.

Velociraptors (often just referred to as 'raptors') are one of the most dangerous animals in Jurassic World. Their history with InGen has been a troubled one, in part because they have been engineered much larger than their base genome, but also because they have proved to be smart and efficient hunters.

More recently they have been part of the IBRIS project where Owen Grady (and supporting team) trained them to obey commands. Their name means 'swift seizer'.

In 1923, an American Museum of Natural History expedition to the Gobi Dessert recovered the first Velociraptor fossil. During the Cold War, Polish, Russian, and Mongolian scientists uncovered further specimens - the most famous of which is the 'fighting dinosaurs' with a Velociraptor battling a Protoceratops. Further discoveries had been made since that time by a number of teams.

Velociraptor fossils have all been located in what was once an arid landscape with mostly sand dunes, and only the occasional stream.

While transporting a raptor to the Raptor Pen, security member Jophery Brown was killed.

During their initial tour of the Isla Nublar Laboratory, the endorsement team and John Hammond witnessed the birth of a baby raptor.

Dr. Alan Grant, Tim, and Lex Murphy encountered a raptor nest while travelling to the Visitor Center. As such, Dr. Alan Grant discovered that the dinosaurs in the park were breeding.

The raptors escaped their pen when the park's mainframe was reset by Ray Arnold. He was later killed by the creatures while trying to restore the power.

Muldoon was ambushed, and kille by the raptors while escorting Ellie Sattler to the electric bunker to restore the power.

Lex and Tim Murphy survived an attack by two of the raptors in the kitchen of the Visitor Center.

The raptors are killed by the Tyrannosaurus rex, allowing the survivors of the 1993 Isla Nublar Incident to escape.

While travelling through the long grass,the survivors of the hunting party were ambushed by a pack of raptors, causing many casualties.

John Hammond's party sent to the island were attacked by three raptors in the Central Facility.

Amanda Kirby was attacked in the Genetic Admissions Lab, but the team managed to trap in in a cage. Dr. Alan Grant was then surprised that it called for help.

A female raptor wounded Udesky to use him as bait to lure Billy, Amanda and Paul Kirby, but failed.

Dr. Alan GRant was saved by Eric Kirby using gas grenades, which drove the raptors away.

The survivors were forced to return the Velociraptor eggs that Billy Brennan stole from their nest. Dr. Alan Grant used a resonating chamber to mimic the raptor's cry for help, allowing their escape.

The raptors' loyalty to Owen Grady returned when he removed the camera attached to Blue's (the beta raptor) head. Two of the remaining raptors were killed by the Indominus rex, and Blue fought alongside the Tyrannosaurus rex, eventually winning. 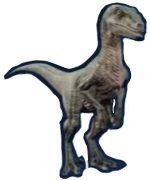 Add a photo to this gallery
Retrieved from "https://jurassicpark.fandom.com/wiki/Velociraptor/JW:_E?oldid=234454"
Community content is available under CC-BY-SA unless otherwise noted.