Velociraptor is creatable in Jurassic World: The Game as a Super Rare carnivore.

It is unlocked by completing battle stage 38. Once the battle stage is completed, it can be purchased in the market for 1,500 DNA or found through card packs.

A level 40 Velociraptor can be fused with a level 40 Tyrannosaurus rex to create the hybrid Indominus rex.

"Meaning 'swift seizer', the Velociraptor is a well-known dinosaur. In fact, they're often reffered to simply as 'raptors'."

"InGen's Velociraptor clones differ vastly from the originals. They are much larger and featherless."

"Did you know that the extinct Velociraptor would have only weighed 30 pounds and stood at 3 feet tall?!" 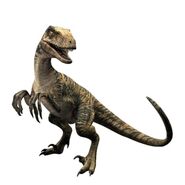 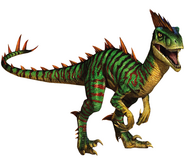 Add a photo to this gallery
Retrieved from "https://jurassicpark.fandom.com/wiki/Velociraptor/JW:_TG?oldid=232019"
Community content is available under CC-BY-SA unless otherwise noted.