The Jurassic Park Visitor Center was a visitor center at the hub of Jurassic Park, featured in the 1990 novel and 1993 movie of the same name as well as its game adaptations. The center was located at the zoo-like amusement park set up by millionaire John Hammond founder of InGen, on the island of Isla Nublar near Costa Rica. It was themed around dinosaurs and it was intended to be the main hive of activity for guests visiting the theme park.

The exterior of the building was made of decorative concrete that followed an unusual concave curve. The lower front section, which had flowing water ducts and decorative foliage on either side, followed a convex curve and was split in half by the stairs which led up to the main entrance door. To the left of the stairway was a wheel chair accessible ramp. On the tinted door was the design of an egg with light rays spawning from its center. Engraved around the door were decorative faux dinosaur fossils, with a relief of the park's skeleton mascot adorning the top of the door. Six tall black tinted windows, three on either side, spanned the building's facade. Keeping in line with the tropical retreat theme, the top of the building had three thatched, tiki-hut styled roofs with a larger one in the center to house the main entrance hall. The top also had guard rails, apparently for use as some kind of a observation deck. The Visitor Center was inseparable from the tour as the main vehicle garage was located in its basement. The tour cars would exit the visitor center via the left side arm from the alcove. Lush rain-forest trees surrounded the area along with an observation pond and other decorative plants.

Inside was the main entrance hall, leading off to different parts of the building. There was a staircase leading to the balcony walkway and above that were glass windows bringing light into the hall. The middle of the hall showed two museum quality dinosaur skeleton replicas, one a Tyrannosaurus rex and the other a sauropod, Alamosaurus[1], suspended by cables in a fighting pose. Once again the hall was made of limestone with wood edges and the floor was laid with black marble. At the rear of the room was a long illuminated wall length painting of dinosaurs in their natural habitat. The rear also led to the restaurant and gift shop. A banner with the words "When Dinosaurs Ruled the Earth" hung across the hall.

The main mural seen in the background, blown up and printed onto transparent windows, was actually three 8 1/2 by 11 paintings painted by the famous naturalist painter Doug Henderson, depicting life in the Jurassic period. The ones on either sides of the doors (one is a Gallimimus, the other a group of Brachiosaurs) were two of the paintings while the other is the main center mural.

The black and white mural in the dining area behind the buffet was actually a painting that is based on Picasso's 'Guernica'. In this case, instead of people, dinosaurs are in their places.

Rooms located within the Visitor Center

In the novel, the building was described as being a very modern, tall, primarily glass rotunda with a black metal frame, making it appear extremely high-tech. There was a banner that hung from the ceiling which read WHEN DINOSAURS RULED THE EARTH. Other exhibits were present as well, namely WHAT IS A DINOSAUR? and THE MESOZOIC WORLD. Guard stations were in the main lobby and on the second floor near the labs. The park was controlled from the control room, and the garage housed the park's vehicles underneath the center.

The Visitor Center and Safari Lodge also feature a closed-circuit television network which would broadcast certain areas of the park (presumably the pens and habitats of the featured dinosaurs). Each Channel for a different Dinosaur Area:

Following the raptors' escape, the Visitor Center is raided. Both security guards are killed, being ripped to shreds by the savage animals. The building offered little protection, with its glass doors and windows easily being shattered. The raptors were also easily able to jump onto the second floor balcony. The animatronic Tyrannosaurus rex is also destroyed by the raptors. The building was destroyed by the Costa Rican military when they napalmed the island at the end of the novel, with Grant personally seeing it burst into flames.

The Visitor's Center is featured in Telltale's Jurassic Park: The Game, it is exactly the same as the movie version.

It eventually suffers additional damage after the events of the film. The T. rex forced the trio to avoid her as best they could, eventually managing to lure the Tyrannosaur away with the help of a tour vehicle. However, the stairs and front entrance were destroyed in the attack.

In Jurassic Park: Operation Genesis the visitor center is part of the entrance.

During the dinosaur breakout, the building incurred extensive damage. The Velociraptors migrated to the visitor's center, where the alpha female and one other followed the scent of the kids, Lex and Tim, into the kitchen. After a brief hunt around the kitchen, the alpha managed to find Lex, only to attack a metal cabinet that showed her reflection and hit the cabinet. The second raptor then chased Tim into the freezer but slipped on the ice, as Tim escaped and locked the door behind him. The alpha, however, managed to regain consciousness and followed the children. The theater window suffered several bullet holes by Dr. Alan Grant while he shot at the Velociraptor and later shattered when the raptor busted through it. The survivors and the raptor climbed onto the skeleton formation, buckling them and bringing them crashing to the ground. The Alamosaurus skeleton fell apart in the process. The survivors' hope seemed lost until Rexy walked in to the hall and killed the raptor blocking their path, allowing the survivors to escape. The alpha tried to avenge her fallen pack member by jumping on the Tyrannosaurus. Rexy tried to grab her, but couldn't at first. Rolling her head, the raptor fell into Rexy's mouth where she was killed and then thrown against the Tyrannosaurus skeleton and let out a mighty roar, while the "When Dinosaurs Ruled the Earth" banner fell beside her.[2]

After the incident, the Visitor Center was left to decay and the front area including the steps leading up to the entrance and water fountain walls were particularly demolished by InGen. Trees and jungle vegetation began to grow dense in the area, eventually almost covering the entire building, though its purpose was never forgotten. Twenty-two years on, Isla Nublar was host to a fully-operational dinosaur theme park, named Jurassic World and owned by the Masrani Global Corporation. During an incident in the park in 2015, two boys named Zach and Gray found the remains of the Visitor Center after stumbling across a damaged Kawasaki ATV, which had been largely reclaimed by nature over two decades to the point its famous double door was barely visible in the overgrowth, and found the remains of the banner and the Tyrannosaurus skeleton (parts of both were used to make a torch). The boys proceeded to the garage, where they found Jeep 18 and Jeep 29, both Jeeps having been left there during the original incident. Getting an idea, and using a battery and fuel recovered from the damaged Kawasaki, the boys managed to get Jeep 29 working again and drove off back to the park.[3]

Two park employees, Claire Dearing and Owen Grady, in pursuit of the boys, were forced to take refuge in the Visitor Center from the park's escaped main attraction, the Indominus rex, which fooled them into believing that it hadn't noticed them before smashing the garage roof in an attempt to kill them. Narrowly avoiding being crushed by Jeep 18 when the hybrid hit the vehicle, Owen and Claire fled through the atrium, followed by the creature itself, which smashed through the maintenance garage, the kitchen, and Cretaceous Cafe as well as breaking part of the overhang and crushing the Tyrannosaurus skull under the weight of its hand. Before it could continue to pursue them, it was distracted by a helicopter flying overhead and it left the ruins.[3]

In season 3, Darius, Kenji and Yasmina, all three of whom are campers from Camp Cretaceous that have been stranded since the Jurassic World Incident encounter and go inside the old Visitors Center during their chase after a Compsognathus who had taken their compass. It is revealed that Blue was nesting there. Blue chased the three out.

The campers later return to the Visitors Center in search of a dropped tranq gun in hopes of killing the two Scorpios rex hybrids rampaging across the island. They are chased inside by the Scorpios Rexes and cornered by them and Blue. However, after Darius gains Blue's trust, the Velociraptor leaps to their defense. The fight causes the celling to begin to collapse and Darius realizes that it will kill the dinosaurs. Together, the kids knock over a scaffolding that causes the roof to collapse completely, destroying the Visitors Center. The campers and Blue escape while the two hybrid dinosaurs are killed in the collapse.

In "Out of the Pack", Kenji leads his father, Lewis Dodgson and several others to the ruins of the Visitor Center in an attempt to find and capture Blue. However, Blue leads the group into a Dilophosaurus nest and she escapes. After the escape, a dejected Kenji talks with Mae Turner near the entrance before the others return with a captured Limbo and Pteranodon. Melania also angers a pack of Compys living in the ruins by throwing a rock at one of them when it annoys her while Melania is on her cell phone outside of the Visitor Center.

A minor model of the Visitor Center was seen at the Lockwood Manor early in the movie in Sir Benjamin Lockwood's bedroom.

The visitor center was breifly scene in video footage of a news report. The footage is most likely from 1994.

Universal Orlando Resort's Islands of Adventure theme park in Florida has the Jurassic Park Discovery Center, a real-life version of the Visitors Center from the film. The center is modeled after the film's center, but is quite different.

On the lake-side of the building the exterior has been designed to resemble the movie-version of the center. On the park-side a 3D mural of a T. rex fossil has been embedded in the wall. Inside, a large mural extends across the front wall containing several dinosaur species in a realistic artist impression of a Jurassic period forest, ocean, and field. Visitors who enter the front of the center and enter the main rotunda will see several skeletal mock-ups of Tyrannosaurus rex, Brontosaurus, and a Pteranodon. The "Center" connects to a Jurassic Park themed playground, and houses a dining area and a gift-shop on the second floor.

The interior of the visitors center

T. rex bites The Big One

The visitor center still under construction

The original banner is also discovered

The brothers explore the abandoned structure

Gray Mitchell find a pair of night vision goggles, the same ones that Tim Murphy used

Behind the scenes of the visitor center set in Jurassic Park

Behind the scenes of the visitor center set in Jurassic World

Night vision goggles at the garage

Visitor Center's mural despicting a Raptor and a pack of Parasaurolophus 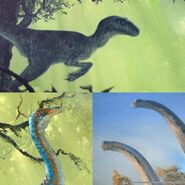 Raptor, Gallimimus and Brachiosaurus from the mural

The Visitor Center was first discovered by Zack and Gray in the 2015 film later in Camp Cretaceous Season 3, Darius, Kenji and Yaz discovered the ruins.

Darius, Kenji and Yaz inside the ruins of Visitor Center in the Lobby

The T. rex skull is surprisingly intact despite being crush by the Indominus rex back in 2015

Concept art of the center's rotunda

Concept art of a Raptor attack at the center's rotunda