Yasmina Fadoula, nicknamed Yaz, is one of the main characters in the Netflix series, Jurassic World: Camp Cretaceous. Her character is voiced by Kausar Mohammed.

Yaz is a guest of Jurassic World. She attends Camp Cretaceous.

At Camp Cretaceous, she meets five other campers there who were also participating in the camp. They engaged in several exciting activities at the camp, led by Roxie and Dave, the two camp counselors. She saw dinosaurs up close, drove a Gyrosphere, and made many incredible memories. Yasmina seemed to connect most with another camper, Sammy Gutierrez and ran to her defense when Brooklynn accused Sammy of stealing her phone.

After disaster struck and the dinosaurs got out of containment, Yaz and the campers were left on their own to fight for their lives. They went on the run, trying to escape the dinosaurs, and Yaz managed to make it to a ferry port alive. However, the ferry had already left, so she was left stranded on the island at the end of the first season of the show along with her fellow campers.

Yasmina is partly carried by Brooklynn and Sammy Gutierrez due to her injury, fleeing from pursuing dinosaurs. Everyone eventually reaches Main Street in search of food and communication, and Yasmina takes the first watch that night. She notices Darius Bowman having a nightmare and wakes him, then suggests he do something fun to clear his head, e.g. pushups. Darius prefers to read plaques, and doing so leads him to realize that a distress beacon is probably camouflaged somewhere on Main Street. She helps monitor the T-Rex while Darius enters its lair to reach the beacon, and then flees with everyone else after Darius activates the beacon.

Still injured, Yaz is left behind at their new base to rest under the care of Kenji Kon, which she at first detests. Disgusted by Kenji's laziness, Yaz continues to push her limits by trying to sift through the rubble, using a makeshift crutch. This forces Kenji to come after her and attempt to stop her, but she rattles off her athletic medals as a way of conveying her refusal to give up under any circumstance. Not having it, Kenji takes her crutch, but still she won't relent, and ends up hurting herself even further. Kenji then carries her back, and during the process makes her realize her own limitations. She then tries to get away from Kenji, but collapses and cries. He comforts her, assuring her that sometimes one must rely on others, then continues carrying her back to camp, now reconciled. When the others return, she draws a schematic of a tree house for their new base.

Her ankle healing, Yasmina is now up for a trip with Brooklynn and Sammy to investigate Brooklynn's strange frozen flowers. During their search, Yasmina talks with Sammy about high school and with Brooklynn about a show they all like, until eventually they arrive at a genetics lab. There, they search for clues until a Baryonyx group arrives, forcing them to flee back to camp. Yasmina helps Darius draw certain dinosaurs there, until everyone notices a campfire in the distance.

Yaz runs to the fire with everyone else, and is saved by Hap, Mitch, and Tiff from a Ceratosaurus which tried to eat them en route. At their camp, Yaz luxuriates with everyone else, and sides against Brooklynn when Brooklynn gravely offends Darius, instead going with Mitch and Tiff to observe dinosaurs. However, something goes wrong at camp, and when Yaz returns she finds Hap, Brooklynn, and Kenji gone.

Yaz begins to suspect Mitch and Tiff, and decides to distract them while Darius snoops around, but Yaz ends up captured by Tiff and used as a hostage to force Darius to reveal the location of the watering hole. Eventually, Darius calls out to a dinosaur which charges them all and scatters them. In the chaos, Darius gives her a piece of paper and sends her running — she's the only one to escape. She then meets up with Brooklynn, Kenji, and Ben Pincus as well, who she fiercely hugs. The paper that Darius gave her turns out to be a map, with Main Street marked.

Everyone goes into the tunnels to try to reach Main Street in time to help Darius and Sammy, but they end up blocked by a gate. Yaz accompanies everyone deeper into the structure until they find a control center, but she's unable to significantly help. Kenji manages to restore the power, and eventually everyone figures out how to reactivate the hologram of a T-Rex, which distracts the real Rex long enough for Sammy and Darius to escape.

Yasmina is sent by Darius to drive away the dinosaurs from the watering hole, so she gets a car and drives out, blaring music and flashing lights to frighten the dinosaurs into a stampede. However, after driving them off her car breaks down, leaving her stranded when they start charging right back in fear of the T-Rex. Ben picks her up onto Bumpy, and at length they manage to escape from Rex and then regroup with everyone else at the docks. They have a huge group hug, which gets to be too much for Yaz, but she endures with good humor.

In season 1, Yaz is sarcastic and gruff, as her training regimen has caused her to lead a disciplined and solitary life. Yasmina is an introvert and loves to draw in her free time. She can be very sensitive when it comes to trust and new friendships, finding difficulty to forgive Sammy for her actions. Yaz also isn't above showing grief as she did cry after Ben's supposed death. During her adventure to escape the Jurassic World incident alive along with her newfound friends, Yaz begins to develop a new sense of friendship and knows that she and her friends are on their own and that they will have to rely on each other to survive.

In season 2, Yaz is more friendly with the other campers, especially Sammy. She even hugs Ben, after learning that he is alive.

Yaz has brown eyes, she wears a warm gray and gray jacket (still remains fully zipped up just like Brooklynn), underneath a purple and gray tank top, the right sleeve during stranded on Isla Nublar with the other campers. (is almost torn off) She has dark brown hair and tied up in a long ponytail. In the first episode of Season 1, she wears gray jeans later been replaced by sport shorts are dark gray, purple lines that shapes the letter "T" upside down and gray cuff (wears mostly during through the show) also has white socks, gray and purple shoes. 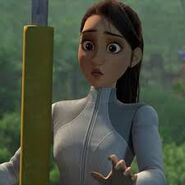 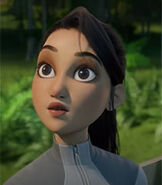 Yaz looking at the gates. 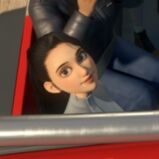