Yutyrannus is an extinct genus of theropod dinosaur that lived during the early Cretaceous period in what is now northeastern China related to T. rex. It had a length of 9 meters (30 feet) and an estimated weight of about 1.4 tonnes (3,120 lbs). It is known for being both the largest known feathered dinosaur and the biggest theropod with direct evidence of feathers so far.

Yutyrannus became a limited edition dinosaur in Jurassic Park: Builder in 2012 and was the first dinosaur in the game to have feathers although the recently added Utahraptor has feathers. 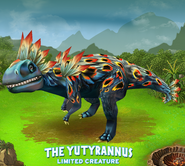 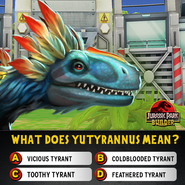 Yutyrannus is one of the tournament dinosaurs in the game.

Yutyrannus was considered to appear in Jurassic World: Camp Cretaceous, where a baby was set to play a major role, but it was replaced by Bumpy the Ankylosaurus.