Yutyrannus is creatable in Jurassic World: The Game as a Tournament carnivore.

Yutyrannus is unlocked by winning a Yutyrannus pack from either the roulette or if the player places in the top 1% of the Yutyrannus tournament. Additional individuals can be purchased in the market for 6,500 DNA or found through card packs.

"InGen's Yutyrannus is one of the only cloned species to maintain its feathery down."

"Did you know that the Yutyrannus lived during the early Cretaceous period in what is now northeastern China?"

"A relative of the T. rex, the Yutyrannus is known as both the largest feathered dinosaur and theropod!" 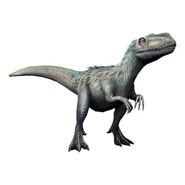 Add a photo to this gallery
Retrieved from "https://jurassicpark.fandom.com/wiki/Yutyrannus/JW:_TG?oldid=232031"
Community content is available under CC-BY-SA unless otherwise noted.