Zachary "Zach" Mitchell is a teenage boy who was present in the incident at Jurassic World, with his younger brother, Gray. He is the older son of Karen and Scott, as well as the older nephew of Claire Dearing.

Zach appears in the novel, The Evolution of Claire, as a toddler. He plays no major role in the book.

Zach was talking to his girlfriend about how he should send texts so that she doesn't "forget" him. After that, he entered into the car with his and Gray's mother and father, preparing to go to a local airport to go to Jurassic World.

After boarding an airplane, Gray and Zach boarded a ferry boat to Masrani Global Corporation's famous dinosaur theme park Jurassic World[2], whose aunt, Claire Dearing, was Senior Assets Manager for.[3] They were supervised by Claire's personal assistant Zara, as Claire was too busy to spend time with her nephews. While there, they got to see many of Jurassic World's attractions, including the Mosasaurus Feeding Show, Underwater Observatory, and the T. rex Kingdom. On the way, in the Monorail, Zach told his brother to stop crying and grow up, seeing as how Gray was in tears after hearing that his mother and father are getting divorced.

At the Gyrosphere Valley, Zach than looks at that girl and tell Gray to quiet down. Then Gray and Zach boarded Gyrosphere 07, but ignored an order for the ride to return and ventured into the Restricted Area, though Gray was reluctant. They entered the Restricted Area, encountering four Ankylosaurus, but then Gray suddenly saw a fifth dinosaur reflected in the glass, one with white scales, spikes, razor sharp teeth, and bloody red eyes. This was the Indominus rex, the park's first genetically-modified hybrid which had escaped her paddock. The two nervously looked behind them and saw the creature, which let out a blood-curdling roar and kicked Zach and his brother's vehicle between two Ankylosaurus who were also fleeing from the hybrid. One of the Ankylosaurus swung its clubbed tail at the spherical vehicle, causing a massive crack before slamming the Gyrosphere to a nearby tree, flipping it upside down.

After killing the Ankylosaurus, the Indominus rex noticed the Gyrosphere Zach and Gray were on, due to Zach's phone chiming because Claire was calling. The I. rex attempted to break the Gyropshere by stabbing her sharp claw into the glass. Then the Indominus grabbed the Gyrosphere with her mouth and started slamming it repeatedly into the ground in order to get to Zach and Gray. Thinking quickly, Zach releases the seatbelts and the boys fall out, although nearly getting injured by the glass.

As the Indominus rex chased them through a meadow, Zach and Gray attempted to run, although they stopped at a shallow cliff which led to the pond. Gray was very reluctant, although Zach encouraged him to jump. As they jump, the I. rex narrowly got to them, which the Mitchell brothers made it off and fell into the pond. The I. rex stayed for a few seconds in order to make sure the brothers have survived. After Zach and Gray remained in the pool long enough to make the I. rex think they are dead, the I. rex walked away. Zach comments on how they made it. Zach and his brother travel into the dense wilderness of Isla Nublar, in the process coming across a destroyed jeep with the perpetrator being the I. rex. The brothers discover the remains of the Jurassic Park Visitor Center.

The two brothers enter the Visitor Center's Garage where they manage to get Jeep 29, one the Jeep Wrangler Staff Vehicles parked inside the garage, to work again, which they used to drive back to Jurassic World.

Eventually, he and his brother made it back to Main Street, but not before the pterosaur inhabitants of the Jurassic World Aviary were attacking Main Street. They witnessed one Pteranodon grab Zara and fly off with her, which resulted in Zara falling into the Mosasaurus containment tank and both her and the Pteranodon being consumed by the Mosasaurus. The two were nearly crashed into by a falling Pteranodon, but it slid to a few inches from them. After hearing their aunt calling for them, they found her just in time to witness her shooting a Dimorphodon that was attacking Owen Grady, which surprised them, but not as much as when Owen kissed her.

As they were fleeing the chaos, Owen and Claire heard from Lowery that Vic Hoskins was intending to use Owen's trained Velociraptors to hunt the Indominus, much to Owen's fury. Zach watched as Owen slugged Hoskins in the face and curiously asked him questions about the raptors. The two took refuge in an MVU, where they shared a brotherly moment when Zach vowed to be a better brother to Gray. The two watched as the raptors pursued the hybrid, only to turn on the humans and kill most of them when it was revealed to have Velociraptor DNA. Zach and Gray were horrified when a soldier was killed by a raptor inches away from them. They reached Main Street with Owen in tow, only to find the labs in the Innovation Centre being cleared by InGen soldiers and tanks filled with more hybrids. Hoskins then appeared and revealed his intentions to use the hybrids for military purposes, but Delta intervened, killing Vic in the process.

Zach and Gray, alongside Owen and Claire, ran out to escape from the Innovation Center. However, their escape was cut off by Blue, Echo, and the newly-arrived Delta, but Owen was able to regain his position as alpha just as the Indominus arrived. Blue refused to kill the humans and was swiped, sending Blue to crash at a nearby wall. This results in Echo and Delta attacking the hybrid with Owen providing covering fire. Hiding in a gift kiosk, Zach heard that Gray said that they needed "more teeth", which motivated Claire to go to Paddock 9.

Owen joined them as Delta and Echo were killed by the hybrid, which proceeded to attack them and very nearly dragged Gray out to his death before Zach saved him. Just then, Claire arrived with the park's old veteran Isla Nublar's T. rex. However, the Indominus rex proved to be too difficult for even the T. rex to defeat and the Tyrannosaurus was smashed about into the kiosk, nearly killing Zach and the others, before being thrown to the ground. Zach watched as Blue came out of nowhere and attacked the hybrid, saving the T. rex from the I. rex's killing blow, and the two carnivores used their combined strength to hurl the Indominus to the edge of the Jurassic World Lagoon, where it was dragged to its demise by the Mosasaurus. After watching Rexy and Blue bid each other farewell, Zach, Gray and the others were evacuated to the mainland, where the Mitchell brothers were reunited with their parents.[2]

While Zach doesn't appear in the series; Roxie mentions Zach and Gray as potential campers over a phone call with Claire Dearing.

Zach initially came across as highly aloof and uninterested towards anything in general, with the exception of exquisite teenage girls. He expressed difficulty in showing any emotion beyond indifference, to the point he was unwilling to tell his girlfriend he loved her before he departed for the park. He is calm, level-headed and composed even in life or death situations; like when he and his younger brother Gray were attacked by the Indominus rex, he did not panic. Zach is the far more mature of the two siblings; when he learned from Gray that their parents are getting divorced, although he is upset, he knows there is nothing they can do about it. This awareness does not prevent him from behaving openly cold towards Gray, something which deeply saddens their mother. In the aspect of being responsible for Gray, Zach shows some irresponsibility by driving his brother and himself with the Gyrosphere into the off limits zone from Jurassic World, which ended up putting the siblings in great danger. Over the course of the park disaster however, the danger he faces alongside his brother brings out his more caring and responsible side, proving he will do anything to protect his family no matter what.

Gray is Zach's younger brother, but he easily gets annoyed with his childish behavior and often is annoyed with him. He occasionally teases Gray, and was originally unconcerned with his emotional responses. When they were sent to visit their aunt Claire at Jurassic World, Zach doesn't feel too keen to look after Gray at first, but after they barely escape from the Indominus rex, he knows they'll need to rely on each other to survive, and becomes more devoted to protecting his younger brother which benefits both of them. Zach also didn't seemed to care for his brother's safety at first, being responsible for their attack at the hands of the Indominus Rex, however, he was probably just genuinely trying to have some fun with Gray and didn't expect things to get out of control.

Althought Zach does love his parents, it's implied that he doesn't give too much attention to them aswell as Gray, being completely clueless about their relationship problems and incoming divorce, having to find out through his little brother. However, he still cares for them deeply and happily hugged them once they were reunited after the incident.

Though Zara was assigned to look after Zach along with Gray, during his visit, she was unenthusiastic about the task and preferred to discuss her wedding details on her phone, which resulted in them leaving her and nearly getting killed by the Indominus rex. Despite this, Zach was horrified when Zara is devoured by the Mosasaurus.

Unlike Gray, Zach seems largely uninterested in spending time his Aunt Claire, and does not care about her inability to spend any time with them. After the containment breach forces the group to stick together however, he slowly begins to grow closer to her.

Zach was immediately impressed by Owen's skills in handling the Jurassic World disaster. He quickly realized that Owen was the key to their survival, and expressed heavy reluctance to leave his side as the situation deteriorated.

Zach is oblivious to the Indominus rex coming from behind, until Gray points it out

Gray and Zach screaming in the Gyrosphere

Zach and Gray being attacked by the Indominus rex

Zach and Gray about to be attacked in the Gyrosphere

The brothers escaping from the gyrosphere attack

They share some brotherly love after escaping the Indominus rex

They have a close encounter during the Main Street attack

The brothers hiding from the Indominus rex 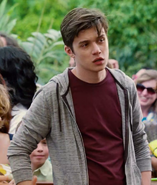